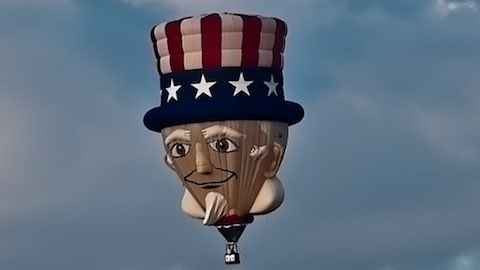 By Peter Jennings (The Strategist)

Before you snuggle by the fire with some eggnog and a copy of Donald Trump's National Security Strategy (subtitled, in case you wondered, 'of the United States of America'), I advise you to plan ahead.

Like Mr Creosote in Monty Python's Meaning of Life:

Maitre D': Ah, good afternoon, sir, and how are we today?

Creosote: Better get a bucket. I'm going to throw up.

Pail prepositioning will be necessary because you will soon encounter passages like this:

Together, our task is to strengthen our families, to build up our communities, to serve our citizens, and to celebrate American greatness as a shining example to the world. We will leave our children and grandchildren a Nation that is stronger, better, freer, prouder, and greater than ever before.

There is so very much more, as the strategy takes us on a journey from the recent dark past in America's history, when

the United States began to drift. We experienced a crisis of confidence and surrendered our advantages in key areas. As we took our political, economic, and military advantages for granted, other actors steadily implemented their long-term plans to challenge America ...

Thankfully, President Trump has 'restored confidence in America's purpose'. Trump is 'defending America's sovereignty without apology. The whole world is lifted by America's renewal and the reemergence of American leadership'.

Friends, I am not making this stuff up. The same country that gave us Washington, Lincoln, FDR and Reagan has now produced a national security strategy that holds a mirror up to Trump and, looking through a glass orangely, likes what it sees.

The strategy, and the bombastic speech that launched it, is primarily a continuation of Trump's endless election campaign. The southern border wall will be built, lazy penny-pinching allies will be held to account, unfair trade deals will be countered, and American manufacturing brought home from overseas. America's 'wicked' and 'evil' enemies will be defeated by an 'America First' strategy -- an amalgam of self-interest burnished with the modest confidence that the USA is 'among the greatest forces for good in history'.

In an age of projectile tweeting, does language matter anymore? Not so much with Trump because he's like that other great strategist, Humpty Dumpty, who tells Alice: 'When I use a word ... it means just what I choose it to mean -- neither more nor less.' Early in November, Trump explained his own version of the Dumpty doctrine to Fox News, when he claimed it didn't matter that the administration had still not filled so many State Department senior jobs:

A key objective of the strategy is to make it look as though everything has changed from the Obama days, when the reality is that there is at least as much continuity with as there are differences from the security policies of past administrations. For all its bluster about a more competitive relationship with China, this will happen 'in accordance with our “One China” policy'. Likewise, America's alliances will stay -- they will just be better managed to extract more burden-sharing.

The most important passage in the strategy is this:

[T]he revisionist powers of China and Russia, the rogue states of Iran and North Korea, and transnational threat organizations, particularly jihadist terrorist groups -- are actively competing against the United States and our allies and partners. Although differing in nature and magnitude, these rivals compete across political, economic, and military arenas, and use technology and information to accelerate these contests in order to shift regional balances of power in their favor. These are fundamentally political contests between those who favor repressive systems and those who favor free societies.

The strategy closely focuses on China stealing US intellectual property, 'proprietary technology and early-stage ideas', and foreshadows the need to build stronger protections for the US 'National Security Innovation Base'. The paper says there will be a clampdown on approvals for foreign (read: 'Chinese') investment into critical infrastructure and, about universities, it says:

The United States will review visa procedures to reduce economic theft by non-traditional intelligence collectors. We will consider restrictions on foreign STEM students from designated countries to ensure that intellectual property is not transferred to our competitors.

That announcement is relevant to Australia's own domestic situation. We should expect the US to come calling on that topic. Australia gets three mentions in the strategy, including the assessment that we continue 'to reinforce economic and security arrangements that support our shared interests and safeguard democratic values across the region'. As always, our brand is well received in Washington DC, even if neither the Americans nor we have any new thinking to offer about the future of the alliance.