Guns: Monsters in Our Midst 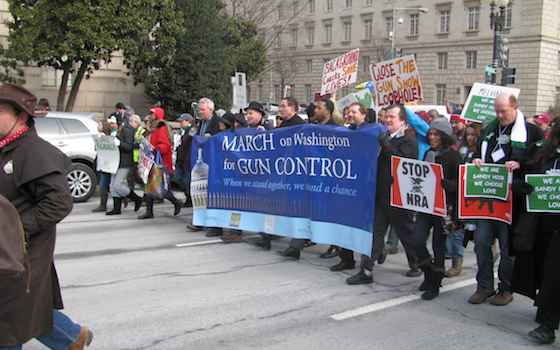 Guns: Monsters in Our Midst

"It was loaded with meaning and death."

Oh lethal, ticklish topic. So many people love guns and swear by them -- many of them people with whom I am otherwise in essential political agreement. And it's not like I relish a debate about "gun control," a tug-of-war about limits that offends most gun lovers and causes weapon-buying sprees after every mass murder.

But the topic is unavoidable. The gun industry is part of the military-industrial complex and its advertising war aimed at the American reptile brain is centered around a permanent state of fear and, even more significantly, helplessness. Most people, or at least most gun owners, think "disarmed" means "disempowered" and the debate, such as it is, ends there.

The quote above is from an extraordinary essay by poet , which gets at the spiritual dimension of the matter:

"The Gun as steel metaphor carrying the human urge to dominate and lay waste to an enemy or perceived threat. Guns as import and export. Gun, its cinematic ordnance, is international calling card.

The gun is not neutral, a mere tool that can serve, like a knife or virtually any object with sharpness or bluntness, either a humble, utilitarian function or the most egregious of human impulses. If it were, there would be no gun lobby. There would be no NRA. A gun's mere possession changes human possibility. We're not going to get rid of it.

But according to numbers from gunpolicy.org, an organization that promotes the public health model of firearm injury prevention, is the number one nation on the planet in private gun ownership, with some 300 million of them in the hands of its citizenry -- slightly more than one for every man, woman and child -- and averages approximately 30,000 deaths from firearms per year, about a third of which are homicides and two-thirds, suicides. This is not a statistic to shrug off, nor will the "bad" gun homicides be eliminated or reduced in number when greater numbers of the innocent and ordinary -- schoolteachers, for instance -- arm themselves in order to shoot back at the criminals and crazies.

As I wrote a year ago, in the wake of the Sandy Hook shootings: "Before we need a gun debate in this country, or on this planet, we need a sensible discussion about the nature of empowerment, and we need to wrest the concept from the hands -- if necessary, the cold, dead hands -- of gun-industry shills, who claim that unarmed means disempowered, and who forget, among much else, to warn us that it's possible to be both armed and disempowered, and that this is perhaps the most dangerous state of all."

That is, one can be armed and angry, armed and panicked, armed and confused, armed and lost or depressed. A gun in the hands of someone in one of these mental-emotional states will not change the situation for the better. It will magnify the darkness exponentially. And this is what's happening in our country.

After Sandy Hook, , executive vice president of the , proclaimed at a hastily convened press conference: "There are monsters in our midst."

But we won't contain them by shooting them. The fate of this country is not in the hands of scriptwriters or advertising professionals. In the real world, attempting to dominate a situation at gunpoint seldom results in a happy ending. Far more often, it results in tragedy.

We need a serious national conversation about all this, but we can't seem to manage it. Instead, we get politics and stalemate and more of the same. For instance, the post of U.S. surgeon general has been vacant since last July and President Obama's nominee, Dr. , regarded by many in the medical community as highly qualified, faces a brick wall in because, according to the , "he has advocated reasonable and mainstream forms of gun regulation." That's been enough to generate a fierce campaign by the NRA and other gun advocates to block his nomination.

"With public health professionals engaging more forcefully on the gun issue, the NRA has a pressing interest in muting their calls for stronger policy," wrote recently in The Nation. "Really, the campaign against Murthy is the continuation of a longstanding effort to make discussion of gun violence taboo. For years the NRA has worked to bury information about gun violence and its public health implications."

The monsters in our midst are woven into our national identity. American society was built on a foundation of slavery and genocide: aggressive racism, Eurocentrism, a right to dominate others. We haven't faced these monsters; we've simply armed them. We have 300 million guns in private hands, and counting.

We are a society at war with ourselves as well as with much of the world. Gun control in various forms may contain that war, but only a shift in consciousness will end it. That shift must include the realization that power requires more than the means to point, shoot, kill.

"Guns: Monsters in Our Midst "