Which States Have Banned Assault Weapons? 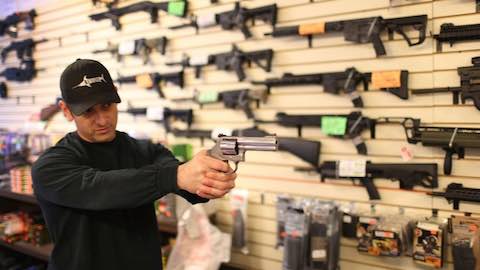 Which States Have Banned Assault Weapons?

Gridlock is currently enveloping Congress when it comes to gun control. It might be up to the states to take action.

Democratic representatives staged a 25-hour sit-in this week to force a vote on gun control measures, yet it is unclear whether Congress will make any progress on the issue. If gridlock continues, it might be up to state legislatures to enact any such laws. But which states have already banned assault weapons, and which have not?

Gun control policy and public debate is plagued by etymological disagreements. In order to consider the effectiveness or constitutionality of any weapons ban, it is vital to note that assault weapons are not readily defined, and jurisdictions vary in their interpretation of the label. Many semi-automatic firearms may be included in the category of assault weapons, but the exact parameters that differentiate standard sporting rifles and assault weapons are still contested heatedly. In the original 1994 Assault Weapons Ban (AWB), 19 firearms were outlawed explicitly, in addition to large-capacity magazines and firearms with specific militaristic elements in their design. Because the problem characteristics were clearly outlined, manufacturers were easily able to skirt the ban by making cosmetic changes to the design of their weapons, likely curbing the effectiveness of the ban.

All this semantic conflict complicates a data-driven approach to gun laws, since visualizations using gun type as a variable often do not list the characteristics of each gun. With these limitations in mind, we can begin to consider the data. As this InsideGov visualization demonstrates, semi-automatic handguns are used in 40.3 percent of mass shootings, far more than assault rifles (11.8 percent), semi-automatic assault handguns (2.5 percent) or assault shotguns (0.8 percent).

So, are the firearms labeled "semi-automatic handguns" assault weapons? Sometimes. According to the NRA's website, the term "handgun" is synonymous with "pistol," and can describe any handheld firearm, including those of "single-shot, multi-barrel, repeating or semi-automatic variety and ... revolvers." Using this definition, semi-automatic handguns would have been outlawed by the 1994 AWB if they shared at least two of the problem features outlined there.

Polling data collected by the Graphiq network demonstrates that about 71 percent of respondents either somewhat favor or strongly favor banning semi-automatic weapons, while about 29 percent of respondents somewhat oppose or strongly oppose the same. Semi-automatic weapons may encompass military-style rifles as well as standard sporting firearms, increasing the likelihood that respondents use their own interpretation of the term when choosing their answer.

Despite this widespread support, bans on assault weapons have only been passed in a minority of jurisdictions -- California, Connecticut, Maryland, Massachusetts, New Jersey and Washington, D.C., have outlawed a list of specific assault weapons by name, and Hawaii bans assault pistols only. New York employs a "features test" that defines a gun as an assault weapon when any one of several listed features are present. California, Connecticut and D.C.'s measures also use the single feature test, making the laws in these four jurisdictions the strictest in the country.

As this InsideGov visualization shows, these states represent the entire spectrum of gun-related fatality levels throughout the country.

The Law Center to Prevent Gun Deaths and the Brady Campaign produced a 0 to 100 scoring system to rate the comprehensiveness of gun laws in each state. According to the visualization below, the states with assault weapons bans achieve between 72.5 (Hawaii) and a 93.5 (California) on the scale, and also cluster on the lower end of the fatalities spectrum. The spread across states is dramatic -- Alaska, with a gun laws score of 7, has 19.8 gun deaths per 100,000 people.

While the CDC is still unable to research gun violence, California's announcement that it will fund its own studies suggests more comprehensive data on the effects of bans may be available in the future.