There Ought to Be a Better Law

The Trayvon Martin verdict shows that with "Stand Your Ground" laws, it's your word against theirs and they're dead. 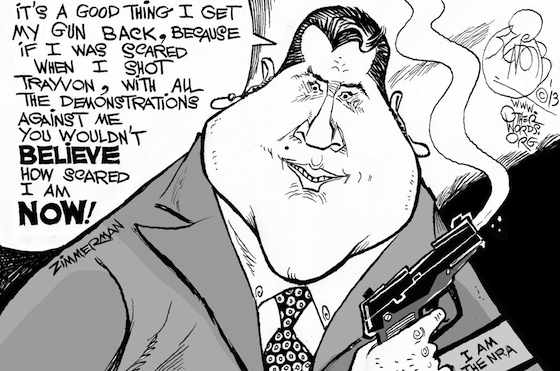 I wasn't too surprised when do-it-yourself vigilante George Zimmerman was found not guilty of murdering Trayvon Martin. The trial took place in Florida, after all.

You have to be pretty stupid or reckless or both to be found guilty of murder in Florida.

If you want to kill someone in the Sunshine State, all you have to do is get him or her alone and then provoke them into threatening you. At that point, you can pull out a gun and shoot them dead, later saying that you felt your life was in danger.

And if you get them really alone, you don't even have to provoke a threat. You can just say you were threatened. It's your word against theirs and they're dead. Perfect crime.

Remember Columbo, the quirky and long-running TV mystery series starring Peter Falk? Columbo would have been out of a job if he tried to exercise his funky detective skills in Florida.

Only two people know what really went down that night, and one of them is unable to tell his version of the events. Zimmerman made sure of that.

His story is that he saw Martin, a black teenager, acting suspiciously in a community where Zimmerman was trolling for miscreants. He followed the kid for a while, reporting the youngster to the 911 operator. Then, acting against the advice of the operator, he got out of his car and started to follow the young man on foot.

Eventually, Zimmerman said, he stopped and began walking back to his car. At which point, the defendant claimed, Martin jumped out from some bushes and attacked him, knocking him down and repeatedly beating Zimmerman's head against the sidewalk. Fearing for his life, Zimmerman pulled out a gun he'd been carrying all this time and shot Martin, killing him.

That was his story. The jury bought it, though I can't imagine why. (Actually, I can imagine why, but I'm not going to say it. It might start a riot.)

This is a cockamamie story from start to finish.

In the first place, Martin was a skinny kid and Zimmerman's an older, burly guy. If they got in a fight, you'd bet on the bigger fellow, particularly if he fancied himself a kind of cop.

In the second place, there were no bushes for Martin to jump out of. Pictures show the site to be clear of foliage.

In the third place, an examining doctor said that Zimmerman's head wound looked as though it were the result of a single blow, not repeated bashing.

In other words, at every point that could be checked, Zimmerman lied. In addition, he lied to the judge about his resources at his bail hearing, for which he was jailed again.

Yet the jury seemed to believe him.

This is what I think happened: Zimmerman got out of his car to follow Martin more closely and, perhaps, harass him. Martin, nervous (wouldn't you be?), turned to confront him. Maybe Zimmerman accosted the young man, maybe he didn't.

In any case, thinking he was acting in self-defense, Martin popped the bigger man, knocking him down, all the while yelling for help.

Zimmerman, panicked now, pulled out his gun and shot his assailant. Then he called the cops again.

I think that plays.

However, it's no more than a fiction, a work of the imagination. Were I a juror, I would not act on the assumptions I made there.

As a matter of fact, I would not vote for a guilty verdict on the charge of murder. By Florida law, the evidence did not prove "beyond the shadow of a doubt" that Zimmerman murdered Martin.

It's a really stupid law.

Given the opportunity, I might vote for a manslaughter verdict (getting out of the car against expert advice puts him somewhat at blame for what happened later). But the prosecution was so lame I doubt I'd get the opportunity.

As President Barack Obama pointed out, we are a nation of laws.

Justice has nothing to do with it.

"There Ought to Be a Better Law "