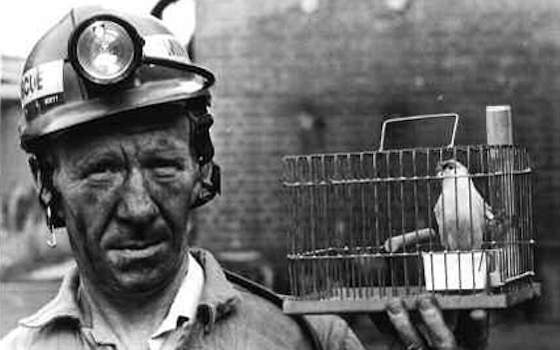 The world withheld love and he went to war. He was an army of one -- another army of one, laying out his plans in secret torment, plotting his "day of retribution."

"The rampage shooters see themselves as moralistic punishers striking against deep injustice," wrote a year and a half ago, in the wake of the Sandy Hook massacre. In his essay, ominously titled "Canaries in a ," which was published at , he notes the upward trajectory of mass murders. Since the '60s, they've increased more than tenfold. Something's going wrong in the world we've created.

The killers are always described as loners . . . monsters, psychopaths. They're not like us, and so the motives for the killings are sought only in the rubble of their lives -- in the left-behind writings and YouTube videos, the psychological reports, the fragmentary reflections of acquaintances -- and they're nothing more than sterile curiosities, with a sort of reality-TV entertainment value.

So it turns out that , the 22-year-old who killed six UC Santa Barbara students, then committed suicide, last week in , was shut out of human connection, nailed into a coffin of isolation. He wrote in his journal some years earlier:

"I was desperate to have the life I know I deserve; a life of being wanted by attractive girls, a life of sex and love. Other men are able to have such a life . . . so why not me? I deserve it! I am magnificent, no matter how much the world treated me otherwise. I am destined for great things."

Unlike most lonely people -- but like all the others who make screaming headlines out of their loneliness -- he sought a military solution to his troubles. His enemies were wrecking his life, so he armed himself and went after them. He "went to war" and, in so doing, dignified his predicament and justified his course of action. Calling it "war" is a nearly airtight justification for violence -- for murder.

The distinguishing characteristic of mass murder -- the coolly impersonal killing of strangers -- is not that the victims are random, but that they are in some way symbolic of the imagined "deep wrong" the killer wants to eradicate. The victims sought, after first stabbing to death two roommates and a visitor in his apartment, were the members of a local sorority: symbols of the women who had rejected him all his life. When he couldn't get into the building, he started shooting at people in the vicinity, who were all college students.

In his essay, Turchin described the "principle of social substitutability": seeing a particular organization, institution, race, nationality, community -- or whatever -- as a threat to one's well-being and, therefore, holding anyone associated with that organization as part of the malevolent "other," thus requiring extermination. This is what mass murder is. This is what terrorism is. This is what war is.

"On the battlefield," Turchin wrote, "you are supposed to try to kill a person whom you've never met before. You are not trying to kill this particular person, you are shooting because he is wearing the enemy uniform. It could easily be any other individual, but as long as they wear the same uniform, you would be shooting at them. Enemy soldiers are socially substitutable. As they say in gangster movies, 'nothing personal, just business.'"

The point of all this is that it's time to stop calling mass murderers "loners," even though that's what they no doubt call themselves. It's time to stop seeing them in isolation from the larger society -- our society -- of which they are a part, whether they know it or not. It's time to acknowledge and begin examining the complex interconnectedness of good and evil, right and wrong. It's time to reach for a deeper wisdom with which to understand, and begin healing, our intensifying social problems.

"Driven by the forces of love," Pierre Teilhard de Chardin wrote at the dawn of World War II, "the fragments of the world seek each other so that the world may come into being."

Something has gone wrong. The fragments of the world are turning on each other. They're killing each other.

The killings in took place just before , a day of notorious short-sightedness about whom and what we're supposed to remember. The convention of remembering "the sacrifice of our troops" requires us to maintain remembrance, as well, of a perpetually lurking enemy from whom we were protected. Subbing for enemies of the past, who are now (perhaps) our allies, are the enemies of the future.

It might just as well be called Social Substitutability Day, unless we deepen and widen its meaning and allow the day's remembrance to include the crimes against humanity every side in war commits -- unless we remember that militarism, like racism and misogyny, are the real enemies.

"The definition and practice of war and the definition and practice of mass murder," I wrote last year, "have eerie congruencies. We divide and slice the human race; some people become the enemy, not in a personal but merely an abstract sense -- 'them' -- and we lavish a staggering amount of our wealth and creativity on devising ways to kill them. When we call it war, it's as familiar and wholesome as apple pie. When we call it mass murder, it's not so nice."