Could a United States - Russia Oil Showdown be Coming? 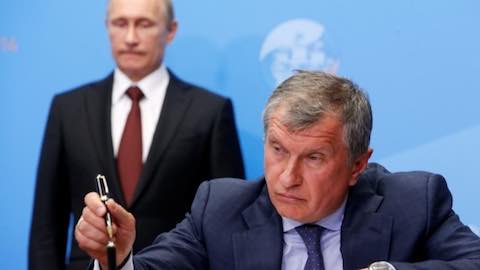 Could a United States - Russia Oil Showdown be Coming?

What would it mean for Saudi Arabia and U.S. shale producers if Russia does an about-face and makes a production push.

About a year ago, a seasoned U.S. oil leader with deep political connections explained to me that U.S. shale would be out of the woods by 2018. His thesis was straightforward: he thought the U.S. economy would see improved growth under President Trump, pulling up global gross domestic product -- and with it, oil demand.

That growth would mean Saudi Arabia would be closer to maxed out on its capability to produce oil, no longer a significant threat to U.S. shale. Under this world view, American producers would be able wrest more market share in the future without fear of toppling prices, hence the Trump administration's optimistic view of U.S. energy "dominance."

At the time, it seemed like a rosy prognostication. I pointed out how easily Russia, armed with a cheap ruble and flexible tax policy, could also increase its own oil output.

But 2018 is now around the corner and that conversation now seems somewhat more prophetic. It raises the question: What would it mean for Saudi Arabia and U.S. shale producers if Russia does an about-face and makes a production push.

It's something to watch.

Because, while Saudi Arabia might not be technically maxed out, global demand is on the rise and Saudi ability to flood the market to punish challengers is, at least for the moment, greatly reduced.

Not only is the kingdom boxed in to supporting higher prices because of domestic economic pressures and its planned initial public offering (IPO) of state oil giant Saudi Aramco, it is also facing long term oil field problems that will not be cheap or easy to fix. Already this year, an unexpected corrosion problem at a significant pipeline at the large Manifa field reduced Saudi spare capacity. Saudi Aramco's hefty new capital budget reportedly targets increases at three offshore fields by 2022 to replace declining capacity elsewhere but past efforts to expand sustainable production capacity have been a painstaking process, stretching over more than a decade at a cost of tens of billions of dollars. The next tranche will be even more challenging.

Regardless of its handicap versus the United States and Russia at adding new producing areas in its oil fields, Saudi Arabia is not yet abdicating its leadership role. It took a pro-active stance towards recent deliberations to extend OPEC-non-OPEC production cuts into 2018. Saudi's steadfast commitment to the deal was not initially reciprocated by Russia, which was more tentative in public statements leading up to the November OPEC meeting. The cat and mouse process led one seasoned journalist to note Russian President Vladimir Putin has "crowned himself king of OPEC." The sequence of events prompted questioning whether Russia has finally achieved what four decades of sponsored military proxies failed to do -- surreptitiously gaining sway over Saudi oil policy.

For its part, Russia's stated concern about a production cut extension was linked in part to the advantage higher oil prices are giving to U.S. shale producers. Russian oil companies complained to Moscow about their excess of 1.2 million barrels a day (b/d) of new oil field projects they'd like to green light. A Citibank report, "From Russia with Love -- A Crude Romance," suggests that not only do Russia's largest companies have 300,000 b/d in idled current capacity, they are sitting on some 23 fields that could add substantial new production in the next five years, including 14 fields on state firm Rosneft's books aggregating 770,000 b/d. Russia also has untapped shale potential.

Any Russian increases will come head to head with rising U.S. oil production, which the U.S. Energy Information Administration said last week could hit 10 million b/d in 2018, up 780,000 b/d. Analysts at Cornerstone Macro are similarly bullish on U.S. supply, especially should prices be above $60 a barrel. They project U.S. tight oil production could rise by 960,000 b/d next year (ex-natural gas liquids) and an additional 770,000 b/d in 2019, if prices hold around $60, bringing total U.S. crude oil production above 11 million b/d over the next two years. Increases would be even larger in a $65 oil price environment, Cornerstone Macro suggests. Longer term, the upward potential for U.S. production could be substantially higher than that, with some estimates as high as 20 million b/d.

The storyline that lack of access to new funds would force capital discipline and thereby lower production gains, (e.g. focus on profits, not growth), looks increasingly questionable given that oil and gas exploration and production companies have raised more than $60 billion in bond sales so far this year, levels typical of pre-price drop conditions. Unlike past, higher risk efforts, this year's borrowing is supported by hedging activities.

Right now, production disruptions in Venezuela, the U.K., and Iraq are supporting prices in addition to a war premium fueled by raging proxy wars across the Mideast. Traders, shale investors, and even reportedly Saudi Arabia, are betting that continued problems in Caracas, among other locales, will make ample room for U.S. rising production. Longer term, there are more producers in line to increase exports, including Iran, Iraq, Brazil, and Canada, to name a few.

But the real geopolitical showdown for market share will likely come down to Russia and the United States: who can bring on new oil fastest?

A looming U.S.-Russia oil and gas rivalry has deep geopolitical implications. It works against improvement in bilateral relations and is a delicate security matter for trading partners of both countries.

The possible conflict over market share is existential to Russian power. Washington's energy dominance tack, which recently included an announced gas export deal for Alaska during the Trump visit to Beijing, sounds as threatening to Russian ears as NATO expansion did a decade or more ago. Not only does Russia rely heavily on its energy exports for its statist budget and as a diplomatic lever, but the commanding heights of Putin's inner circle and his grip on power is intimately inter-linked with Russia's oil and gas elite. Russian influence and economic health has suffered in the past from orchestrated alliances between the United States, Saudi Arabia, and Qatar that targeted Russia's energy earnings. The threat of rising U.S. oil and gas exports could be one factor encouraging increasingly risky Russian adventurism since doing nothing about it could neutralize a major tool of Russian foreign policy.

For now, Russia seems content to collaborate with Saudi Arabia on oil market stability which ironically also suits the current U.S. administration, whose America first jobs message is tied heavily to the economic engine of the shale revolution.

But that delicate oil truce rests on the back of Venezuela and its woes, which is making space for everyone. At some later date, if Saudi stability seems vulnerable to continuing proxy wars in the Middle East, Putin may be tempted to see if he can tip the scales further in Russia's favor, making additional space for his long term export surge and rendering his giant reserves all the more important.