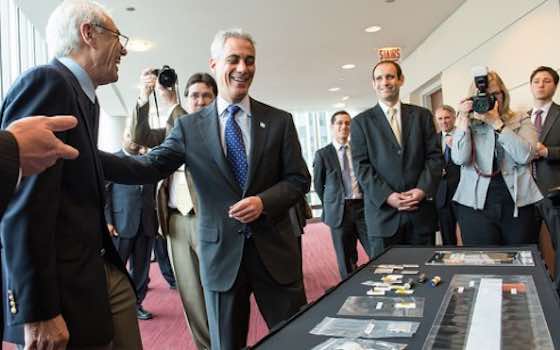 An insurgent people's movement is going after Rahm Emanuel in Chicago.

The people of Chicago are grappling with a big question that people in nearly every urban place face: Can anyone really govern such a sprawling, brawling city?

Reclaim Chicago -- an upstart populist coalition that has become a major force in the city -- says the answer is a great big NO.

Moreover, asserts this grassroots group, no "one" should.

Rather, the many should. If they're organized through a democratic network, the people can be their own government, producing egalitarian policies that improve the lives of everyone and advance the whole city.

Indeed, the problem in Chicago is that "one" has been in charge, imposing corporate rule that further enriches the wealthy while holding down everyone else.

At present, the city's Numero Uno is Mayor Rahm Emanuel. The Wall Street Democrat uses everything from privatization schemes and tax favoritism to harsh budget cuts and arbitrary police action to shift money and power away from the people and into the coffers of the elites.

"Mayor 1 Percent," as the people have dubbed him, thinks he's untouchable.

Reclaim Chicago, however, is about to test that. This independent coalition is backing a top-notch slate of 14 people's candidates to challenge incumbent city council members who've been tail-wagging lapdogs for Emanuel's corporate rule.

And Mayor 1 Percent himself has drawn two opponents for the dominant Democratic Party's February 24 primary election.

Of course, Emanuel is floating on a boatload of special interest cash. But Reclaim Chicago has hundreds of its seasoned and trained members holding personal, door-to-door conversations with Chicagoans.

Win or lose in this go-round, Reclaim Chicago will keep moving onward and upward. And that's what it takes to build a winning people's movement.