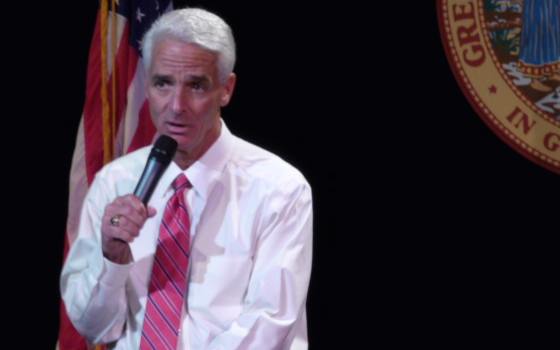 wants to go to this summer, in the middle of his campaign to get elected governor of again.

It would be a flaky thing to do, but that's Charlie. He thinks the trip will win him votes.

His sunny optimism is based on polls showing that most Floridians want an end to the U.S. trade embargo and travel ban against . This trend is apparent even in , where many younger Cuban-Americans and non-Cuban Hispanics believe the embargo should be lifted.

Crist declared the same thing publicly in February at restaurant in Little Havana, a boldly chosen venue. It was a 180-degree swing from his position when he was governor, and also when he was running for the .

A newly minted Democrat, Crist says it's time for a new strategy toward . Of the embargo he recently said: "The definition of insanity is continuing to do the same thing over and over again and expect a different result. This policy has not worked."

He's actually talking about futility, not insanity, but we get the point. The embargo has been a costly, colossal failure, a propaganda gift to the very regime it was meant to topple. This is not what you call breaking news.

Nor, for that matter, is it shocking to see a headline reporting that Crist has switched positions on a major issue. As I've said before, you'll get whiplash trying to keep track of all his flip-flopping.

Still, based on the polls, it's probably safe for a politician running statewide in to come out in favor of normalizing relations with . To travel there, however, is riskier.

Crist, who has already applied to the for permission, said he wants to meet there with "regular" Cuban citizens, not bureaucrats.

At the same time he conceded that his itinerary on the island would likely be controlled by officials.

So it would basically be a government guided tour. Charlie won't be strolling unescorted down the Malecon to chat with food vendors and fishermen, who in any event would be cautious about what they said to him.

The potential for looking like a chump seems high, so why go? And why now, stirring up an increasingly close and nasty gubernatorial race?

I can't imagine a particular photograph or video clip of Crist tooling around that would move an undecided voter in his direction. The embargo is a federal matter, and the governor is helpless to do anything about it.

Another good reason for Crist to stay here is that his trip would give loads of ammo to Gov. camp, which is spending a fortune on political ads trying to undermine Crist's credibility even before the Democratic primary.

Back in 2006, during his successful first run for governor, Crist blistered his opponent for visiting . It was Rep. , a Democrat, who had gone to the island a few years earlier.

Said Crist: "I understand that it's important not to go to when she's under the dictatorship, but unfortunately the man I'm running against doesn't understand that." These comments came, ironically, at in Little Havana.

It required travel companies that organized trips to post a bond.

During his failed bid for the , Crist reiterated his support of both the travel ban and embargo.

Today, he says his thinking changed after talking to many Cuban Americans, young and old.

Oh, and then there's the politics:

"As a Republican, it is expected and anticipated you'll be for the embargo. And, of course, back in the day I was trying to be a good team player and being a round peg trying to fit into a square hole, as awkward as that was for me many times."

Classic Charlie. He doesn't duck from the flip-flopping accusations. He just smiles and admits he goes with the flow.

He hopes to be accompanied to by academics, business people and development experts. He said lifting the embargo would have a huge positive impact on the state's economy, which is indisputably true.

But there's nothing he can personally do to make that happen.

Lots of prominent people have toured , including popes, pop stars and politicians. Few had as much at stake as Crist does.

Pope Benedict XVI even stood for a photograph with .

Earth to Charlie: Don't even think about it.