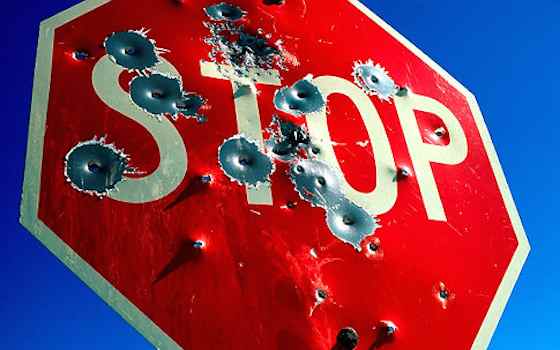 The federal government believed was a paranoid schizophrenic. It had information that she was delusional and suicidal, unable to work and therefore eligible for and disability benefits.

One summer day in 2012, Weathers cashed her government check, bought a .45 caliber pistol from gun shop, returned home and shot her father dead.

So here's the question: If the federal government considers a person is mentally ill enough to receive financial benefits, why can't it also decide that person is dangerous enough to be banned from buying a gun?

Ask that question, and you tumble down a mineshaft.

Members of leap to protect the Second Amendment, especially on behalf of veterans with post-traumatic stress disorder who might receive disability benefits. Medical professionals fear they'll bear culpability for pronouncing a person dangerous or for not finding one so, if the patient then goes on to commit a violent act. Mental health advocates warn against stereotyping people suffering from depression as dangerous. Privacy experts fear medical records will be compromised and say the government shouldn't be cross-pollinating its records systems. would have to share data with the FBI's National Instant Criminal Background Check System (NICS), which federally licensed gun dealers use.

And the NRA would just as soon keep talking about the lack of mental health treatment options, and keep firearms out of the conversation altogether.

And yet the intersection between guns and mental illness is the one point that has gained traction with the public as incident after incident happens in which a mentally unstable person takes a gun and commit mass murder. Bit by bit, progress has been made. States have become better at reporting to the federal registry -- some states. Many are still reluctant to comply with their duty to do so, and it will be a difficult struggle to bring them into the fold.

The sad story of Weathers is an apt illustration that this compliance is necessary. The Brady Campaign to Prevent Gun Violence filed a wrongful death lawsuit filed in March against the , gun shop that sold her the pistol. The Brady case argues that the gun shop owners were negligent in selling Weathers the gun, in part because her mother begged them not to do so.

called the shop two days prior, giving them detailed information of her daughter's mental health struggles, substance abuse and suicidal intent. She was a compelling figure at a press conference: a woman racked with the dual pain of grieving the death of her husband, , and the fate of her only daughter, who is now facing criminal charges.

It's a tragedy that could have been prevented at multiple points.

is a small community. The gun shop had allegedly already sold Weathers one gun, which her parents took away. Common sense agrees with the lawsuit's argument that the gun shop should have reacted to the mother's information.

That said, had there been a more complete federal database of people who are not fit to own a firearm, in this case due to severe mental illness, this tragedy might have been prevented (and it would be a stronger tool to hold licensed gun sellers accountable).

Policy experts with the Law Center to Prevent Gun Violence point out that when people make a case for federal disability benefits, it is in their financial interest to be deemed mentally ill. That's one reason benefits adjudications aren't given weight to determine a person's ability to buy a firearm.

The federal government must be careful not to overreach in its efforts to bar people from gun ownership due to severe mental illness. Most people with mental illness are not violent. But reluctance to assign further stigma to the mentally ill cannot stand in the way of better processes.

The Obama administration moved slightly in the right direction earlier this year by expanding designations that can prohibit gun ownership by the mentally ill to include some people who have been treated in outpatient, not just inpatient care. It also made it easier for physicians to report to NICS and remain within federal privacy standards.

We need to remain focused on the crux of the problem.

It isn't that America has higher rates of mental illness than other countries. Nor is it that our problems with gun violence are merely a question of insufficient mental health care.

Our problem is the easy access to guns by the dangerously mentally ill. And we've got a long way to go to correct that.