Are Hispanics in Danger of Becoming White? 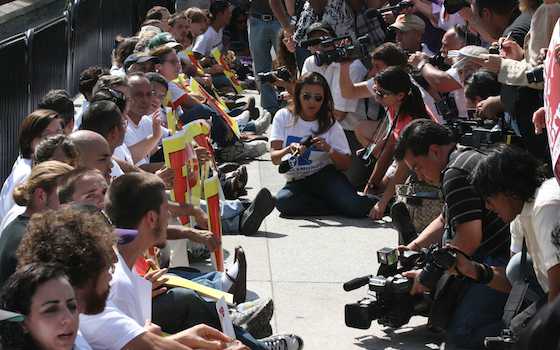 Are Hispanics in Danger of Becoming White?

To all those who complain that Hispanics are unwilling to assimilate, listen up.

Research shows that not only do they embrace American culture, but many also buy into the convoluted messaging around race and ethnicity that has long been this country's specialty. Over time, a large number of Latinos have changed their minds about what race they belong to and have decided that they are white.

Researchers tracked how people changed their racial and ethnic identification categories between the 2000 and 2010 U.S. Census. They looked at how 168 million Americans, more than half of the population, filled out the forms. They tracked the same people, answering similar questions about their racial and ethnic makeup. More than 10 million people changed how they self-identified from census to census.

Most notable were the 2.5 million Americans who said they were Hispanic and "some other race" in 2000 but who a decade later declared themselves as Hispanic and white. Another 1.3 million people flip-flopped in the other direction. And more than a million Americans went from choosing non-Hispanic white to Hispanic white, or the other way around, according to initial findings being reported by the .

So what is up with these racial and ethnic switch hitters? Researchers caution against reading too much into the data for a variety of sound reasons. Still, it's worth pondering why, within a mere decade, a large number of Hispanics decided to identify more solidly as being white.

A major likely factor is the pressure -- and the growing opportunity -- to blend into society and to identify with the majority. This is a familiar phenomenon. All sorts of immigrants, including Irish, Jews and Italians, were once considered irredeemably alien, even racially inferior to "white" Americans. Today you don't find their fourth- and fifth-generation descendants puzzling over how to fill out the census. They check "white" -- because that is how the rest of America now sees them.

In the census study, Hispanics were not the only group with a tendency to shift racial identity. People of mixed races, American Indians and Pacific Islanders were also among those more likely to adopt a new race characterization; non-Hispanic whites, blacks and Asians were the least likely.

"Hispanic" is an ethnicity on the census; it's possible to be any race and also Hispanic. That's entirely fitting. Given the incredible diversity and melding of Latin American cultures, many Hispanics find racial classification problematic, to say the least. Non-Hispanics often mistake "la raza" -- a phrase often used by politically minded Latinos -- as a term of racial exclusion. Actually, it signifies "the people," as in all the people encompassed under the Spanish linguistic umbrella of the .

Still, there has been a tendency for Latinos in to define themselves against "whiteness." That point of view has roots in Latin American anticolonial politics of decades gone by but also in the long history of discrimination by Anglos in this country.

The actor and activist alluded to this tendency recently when speaking at a university. To an audience filled with Mexican-Americans, he asked how many identified with their indigenous roots. Hands flew up. Then he asked who in the crowd acknowledged their Caucasian roots -- which, for many Mexicans, traces back to Spanish conquistadors -- he received a much less enthusiastic response.

"What? You hate half of yourself?" Olmos joked. "Embrace the cultural diversity that is you."

He had a point, at least in this respect: Race is a construct. Its meaning throughout history has had no basis in biological reality but rather in social domination and political contention.

On the other hand, it has to be asked: Why are Latinos allowed to pass into the "white" category while others cannot or will not?

The question for Hispanics is whether they will maintain a sense of being an ethnically distinct minority -- retaining affinity and alignment with other minority groups -- or, whether over time they will blend into the landscape of so-called white ethnics.

The political and social ramifications of this will be significant.

"Are Hispanics in Danger of Becoming White? "