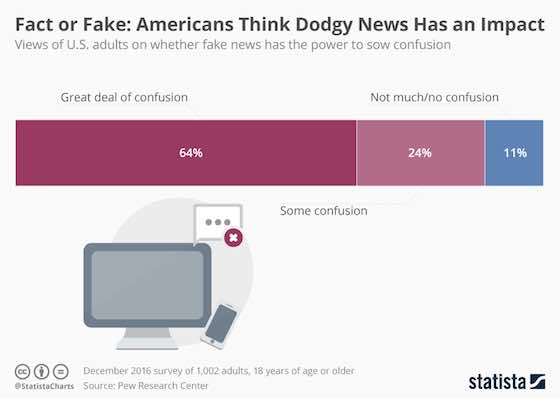 Fake news are in the headlines

On his first press conference as incoming U.S. President, Donald Trump criticized media outlets for spreading unsubstantiated reports on Russia having allegedly compiled dossiers about him.

All the while, Americans actually do think that so-called fake news has the potential to cause confusion, according to data provided by Pew Research Center.

Trump has had his own brushes with distorted information being spread by a member of his campaign, in connection with events dubbed "Pizzagate". He also took quite a while to distance himself from the ridiculous "Birther" conspiracy theory, which states that outgoing President Barack Obama isn't an U.S. citizen by birth.

The chart above shows views of U.S. adults on whether fake news has the power to sow confusion

Fake News Stories Are a Problem -- But Who's to Blame?

Fake news made a lot of headlines over the past few weeks and months. While some consider them a plain nuisance, others think they may have had a significant effect on the outcome of the U.S. presidential election back in November.

Whether their effect is powerful enough to change the outcome of an election is unclear, but what seems clear is that people feel increasingly misinformed. According to a survey conducted by the Pew Research Center in early December, 64 percent of Americans think that fake news is causing a great deal of confusion about the basic facts of current events.

But who's to blame for the onslaught of fake news stories? And more importantly, who's responsible for fighting them? Giving in to the public pressure to do something against fake news on its platform, Facebook announced a new range of tools to prevent them from spreading last week. However, the public thinks that politicians and the general public share just as much responsibility in preventing misinformation from sprawling.

This chart shows what Americans think about the fake news problem. 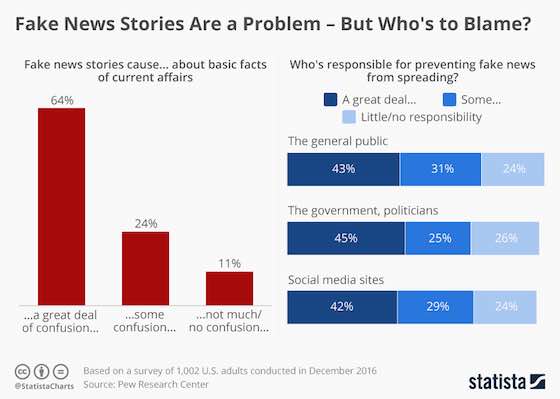