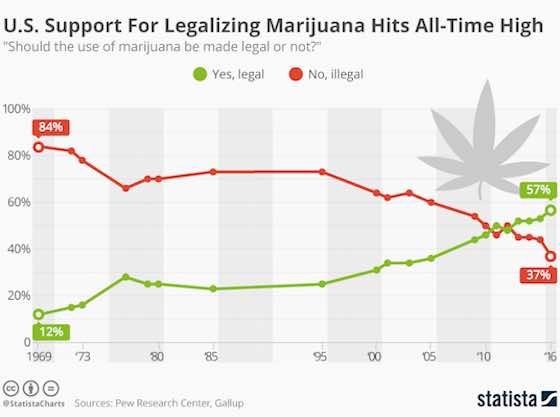 According to a recently-released Pew Research survey conducted, public support for the legalization of marijuana in the U.S. has reached a historic high.

Some 57 percent of U.S. adults now think the use of marijuana should be legal nationwide while 37 percent oppose legalization. Americans haven't always been fans of pot and views have changed rapidly in recent years.

In the late 1960s, 84 percent of the public opposed legalizing marijuana and that number gradually fell to 60 percent by 2006. That trend was largely driven by millennials but support has also increased among other age groups.

Today's wave of support comes as many U.S. states are relaxing their restrictions on the drug or legalizing it altogether. In June of this year, Ohio became the 25th U.S. state to legalize marijuana in some form, while in November, nine states will vote on measures to legalize or expand its use.

The economic effects of the country's legal marijuana sales are also reaching record highs with Alaska, Colorado, Oregon, Washington, and the District of Columbia selling $3.4 billion of marijuana last year.