Americans Shunning the 'Evil Weed' and Embracing Another | United States

Americans Shunning the 'Evil Weed' and Embracing Another 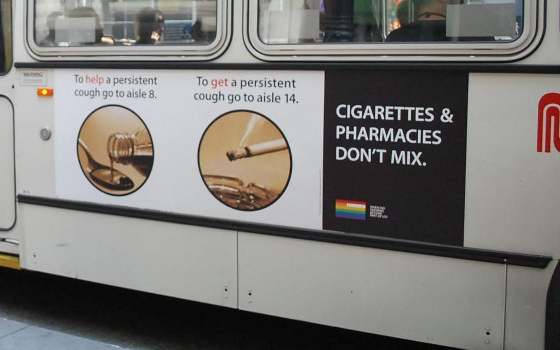 Americans Shunning the 'Evil Weed' and Embracing Another

Americans' addiction to harmful drugs is in the news again in a big way. The nation's largest cigarette-selling pharmacy firm, CVS Caremark>, has decided to stop peddling them at its 7,600 stores. , its chief executive, explained that "cigarettes and tobacco products have no place in a setting where health care is delivered."

CVS, he said, employs "about 26,000 pharmacists and nurse practitioners helping patients manage chronic problems like high cholesterol, high book pressure and heart disease, all of which are linked to smoking."

The decision is being hailed by the , the and the as a positive step in their continuing campaign against a cause of addiction, particularly among the young. According to CVS officials the ban will cost the company in sales, but that is a tiny loss compared to its revenue of in 2012.

In an unrelated story, the death from apparent drug overdose of film actor has simultaneously grabbed newspaper and television headlines across the country. Accounts have focused as much or more on his acting skills as on his longtime history of, and relapse into, drug addiction.

Meanwhile, out in , the legalization of the sale marijuana has created more than a cottage industry there, amid a renewed debate on whether its use leads to serious physical and mental deterioration and is a peril to young smokers.

But it is the danger of addiction to cigarettes among America's youth that continues to drive federal government policy. That is so even as the growing of quality tobacco as a particular American industry remains a staple of American farming, especially in the South, most notably in states like .

The obvious conflict between federal support of the industry even as the government professes to oppose use of its product was comically illustrated nearly 40 years ago in administration. His secretary of health, education and welfare, , was leading a prominent anti-smoking drive at the time.

Carter, campaigning in for the election of a prominent Democratic candidate for governor, gingerly touched on the sensitivities of the local tobacco interest. He declared that, as a result of Califano's efforts, "cigarette smoking will be even safer than it is today!"

Califano's current successor as secretary of health and human services, , applauded the CVS decision, citing the continuing threat of youth addiction. She said 3,200 Americans a day under age 18 will try their first cigarette and 700 will become addicted, and that 5.6 million children alive today will die prematurely of diseases related to smoking.

A spokesman for the chain of pharmacies, which has the largest number of stores, has said only that it will continue to "educate" its customers on cigarette smoking, while "providing smoking cessation products and alternatives that help to reduce the demand for smoking products." Convenience stores in neighborhoods across the country remain the largest sellers of cigarettes and other tobacco products.

Nevertheless, the long federal government campaign against the use of tobacco products has been remarkably successful in , according to the . In 1965, 42 percent of adult Americans smoked; the figure has dropped to 18 percent today. In , where high cigarette taxes apply and smoking is banned in many restaurants and other locales, the number of smokers is down to 14 percent.

announced this week that a new national anti-smoking campaign aimed at young Americans will be launched via social media, providing graphic illustrations of the physical damage caused by cigarette smoking.

There was a time in this country, as viewer of old movies on television will attest, when, smoking was commonplace and an essential confirmation of masculine toughness in gangster films and of feminine sophistication in glamour flicks. But much less so now.

Instead, hard drug use, as in the new sex-and-porn overdose, "The Wolf of ," pollutes the silver screen.

"Americans Shunning the 'Evil Weed' and Embracing Another "