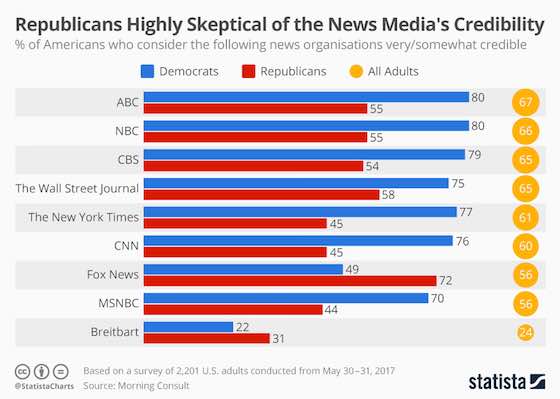 The United States in 2017 looks very much like a divided country. Seldom have the differences between the two political camps been as extreme as they currently are, with little common ground to be found between Democrats and Republicans. One of the reasons for the strong division between party lines is the proliferation of fake news on the internet, which makes it increasingly hard to distinguish between actual and alternative facts. Sometimes it appears as if two different realities exist, because both sides of the political spectrum have no problem finding news stories to back up their opinions.

President Trump certainly played his part in creating this atmosphere of distrust by repeatedly accusing some of the largest news organizations in the country, nay the world, of spreading fake news. As our chart illustrates, his fellow Republicans are indeed highly skeptical of the news media. Less than 50 percent of Republicans polled by Morning Consult consider The New York Times to be a credible news source with most other news organizations earning similarly bad grades from conservatives. Democrats have much more faith in the news media with at least 70 percent of the respondents trusting all organizations included in our chart except for Fox News and Breitbart.

The current level of distrust in the news media is alarming. After all, an independent press plays an important part in the political process and is often referred to as the Fourth Estate.