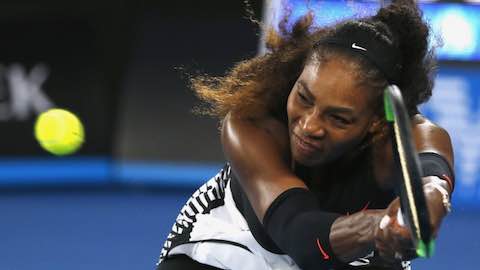 Serena Williams said it was a 'great feeling' to surpass Steffi Graf as the most prolific grand slam champion of the open era.

The 35-year-old, who won her first major at the U.S. Open in 1999, drew level with Graf's tally of 22 at Wimbledon last year and edged ahead of the German with her 6-4 6-4 victory over her sister Venus on Rod Laver Arena on Saturday.

"It's such a great feeling to have 23. It really feels great," she told reporters.

"It's a great feeling. No better place to do it than Melbourne."

Serena played vintage tennis at Melbourne Park as she chased her seventh Australian Open championship, despite missing the back end of last season with a shoulder injury.

On current form, she would have to be an odds-on favorite to add a few more titles to her remarkable collection this season but the American said there was no great masterplan.

Australian Margaret Court still holds the all-time record with her haul of 24, the majority of which came before the dawn of the professional era, but Williams said she was in no great hurry to think about an assault on that record.

"One thing I learned in the past is you have to enjoy it," she said. "That's the beauty of winning Australia, you have a few months to relax.

Serena was delighted to learn she will return to world number one in place of Angelique Kerber on Monday, even if her coach Patrick Mouratoglou had kept her in the dark about the possibility.

"That was a bonus. I didn't know actually. It feels good. I like being on top, so I really like that feeling," she said.

For many, Serena long ago settled the discussion over who was the greatest women's tennis player of all time.

Perhaps out of modesty or respect for the great players that have gone before, Serena has rarely discussed the matter but she was prepared to accept she was top three.

"I definitely think so," she said. "I mean, between Martina (Navratilova), myself, Steffi Graf, hands down we are leading that conversation."

Following is a list of Serena Williams' 23 grand slam singles titles after the American surpassed Steffi Graf's professional era record with victory at the Australian Open:

** King won a total of 12 grand slam singles titles, fourof them before the professional era