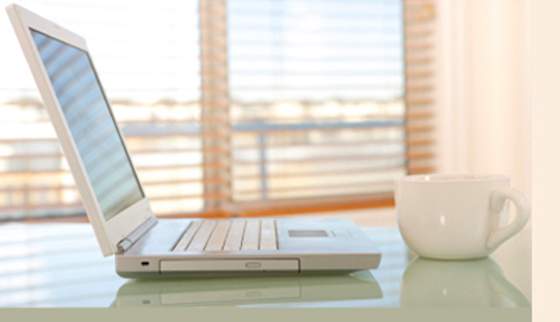 by Lee Rainie and Sara Kiesler

Most internet users would like to be anonymous online at least occasionally, but many think it is not possible to be completely anonymous online. New findings in a national survey show:

A section of the survey looking at various security-related issues finds that notable numbers of internet users say they have experienced problems because others stole their personal information or otherwise took advantage of their visibility online -- including hijacked email and social media accounts, stolen information such as Social Security numbers or credit card information, stalking or harassment, loss of reputation, or victimization by scammers.

Most internet users know that key pieces of personal information about them are available online -- such as photos and videos of them, their email addresses, birth dates, phone numbers, home addresses, and the groups to which they belong. And growing numbers of internet users (50%) say they are worried about the amount of personal information about them that is online -- a figure that has jumped from 33% who expressed such worry in 2009.

This survey by the Pew Research Center's Internet Project was underwritten by Carnegie Mellon University. The findings in this report are based on data from telephone interviews conducted by Princeton Survey Research Associates International from July 11-14, among a sample of 1,002 adults ages 18 and older. Telephone interviews were conducted in English by landline and cell phone. For results based on the total sample, one can say with 95% confidence that the error attributable to sampling is plus or minus 3.4 percentage points and for the results from 792 internet and smartphone users in the sample, the margin of error is 3.8 percentage points. More information is available in the Methods section at the end of this report.

A closer look at key findings

The chart below shows the variety of ways that internet users have tried to avoid being observed online. 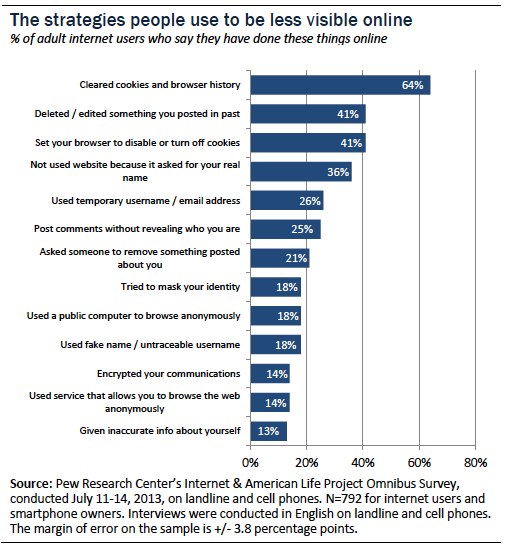 Beyond their general hope that they can go online anonymously, the majority of internet users have tried to avoid observation by other people, groups, companies, and government agencies. Hackers, criminals and advertisers are at the top of the list of groups people wish to avoid. 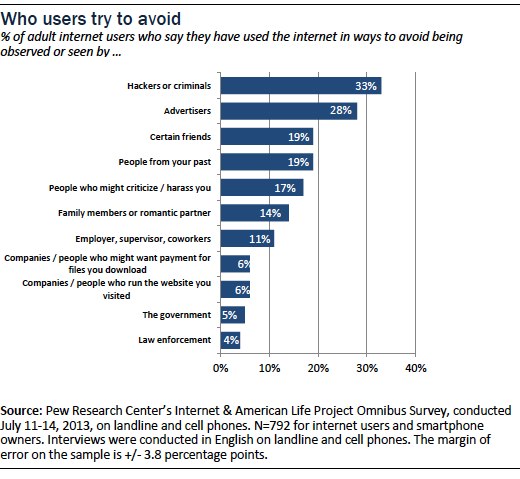 Users report that a wide range of their personal information is available online, but feel strongly about controlling who has access to certain kinds of behavioral data and communications content.

Users know that there is a considerable amount of personal information about them available online. Among the list of items queried, photos were the most commonly reported content posted online; 66% of internet users reported that an image of them was available online. And half (50%) say that their birth date is available. 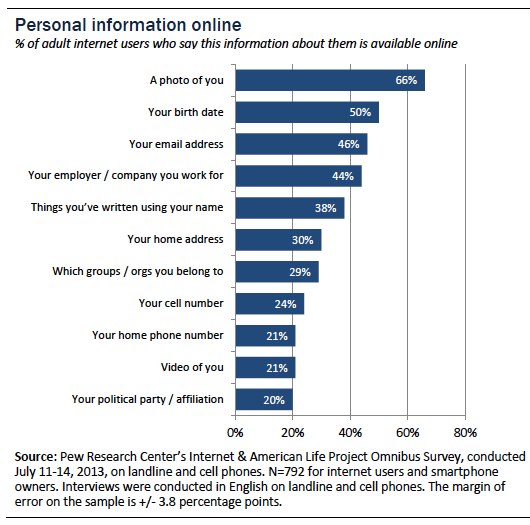 Another set of questions focused on the kinds of "data exhaust" that is generated as a result of everyday forms of online communications, web surfing and application use. Respondents were asked how much they cared "that only you and those you authorize should have access" to certain kinds of behavioral data and communications content and there was notable variance in the answers. The content of email messages and the people with whom one communicates via email are considerably more sensitive pieces of information when compared with other online activities and associated data trails. 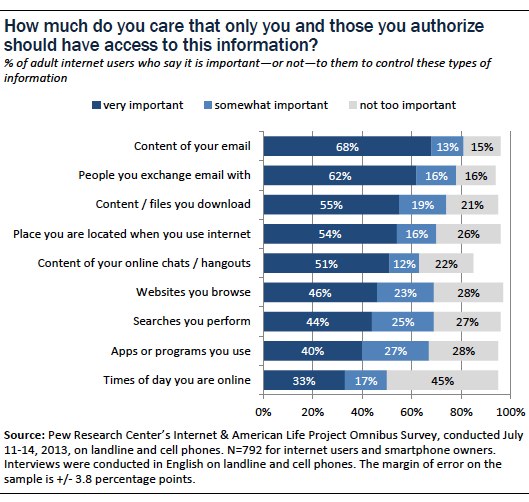