Pinterest Could Soon be Second Most Used Social Network

Facebook may be the most popular social network by a mile with Twitter trailing. While Facebook won't be usurped any time soon from its top spot, the competition for second place is heating up.

For huge events like the Super Bowl, Twitter was the venue for users to express their happiness and vent their frustration. But even with that popularity, Facebook still reigns supreme.

Just last August 2012, an estimated 12 percent of users were on Pinterest -- indicating substantial growth according to the most recent study.

While still in third place, there has already been talk of Pinterest possibly becoming the most popular social network.

"According to statistics released by ComScore in February 2012, Pinterest has more than 10 million monthly unique visitors and is now the third most popular social networking site behind Facebook and Twitter.

"With these staggering numbers, it looks like Pinterest could be on track to become the next social media giant," Forbes reported.

Pinterest, the online pinboard, has attracted 15% of internet users to its virtual scrapbooking. Whites, young people, the well-educated, those with higher income, and women are particularly likely to use the site. Pinterest is equally popular among those 18-29 and 30-49 (19%). Women are about five times as likely to be on the site as men, the largest difference in gender of any site featured in Pew's research report. 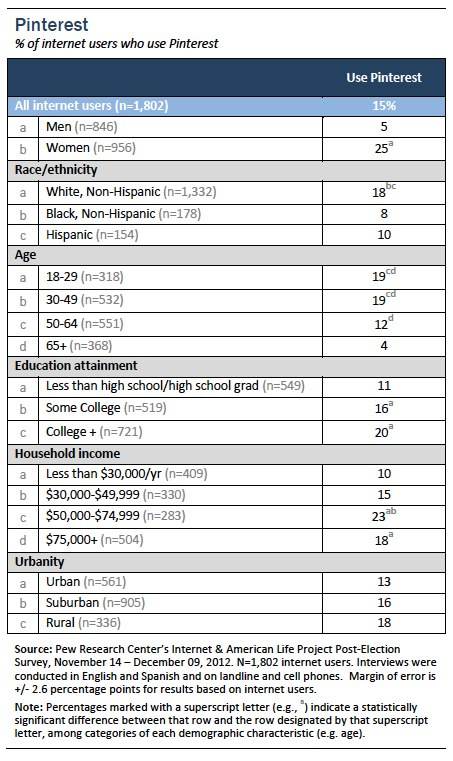 Pinterest Could Soon be Second Most Used Social Network

"Pinterest Could Soon be Second Most Used Social Network"