How Apple's HomePod Measures Up 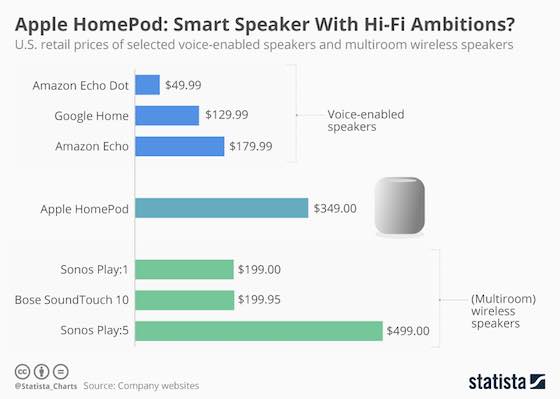 How Apple's HomePod Measures Up

Is Apple HomePod a Smart Speaker with Hi-Fi ambitions? This chart compares retail prices of selected wireless speakers, voice-enabled and not, in the United States.

For the first time since the presentation of the Apple Watch in September 2015, Apple unveiled an entirely new product at its annual Worldwide Developers Conference (WWDC).

Confirming earlier rumors, the new device named HomePod is indeed a voice-enabled speaker, but as opposed to Amazon's Echo and Google Home, Apple's new device appears to be a wireless speaker first and a virtual assistant second.

The HomePod, which is set to debut later this year, is still in prototype status but yesterday's presentation clearly emphasized sound quality and music-related functionality over voice integration and smart home features. "We want to reinvent home music", Apple CEO Tim Cook said before Phil Schiller, the company's Vice President of Marketing, pointed out the HomePod's unique position in the current market landscape.

Most other devices on the market today are either smart, voice-enabled speakers with limited sound quality (think Amazon Echo and Google Home) or wireless speakers offering superior sound but lacking voice integration. Apple wants to combine the two categories in one device and has price the HomePod accordingly.

At $349, the HomePod will be significantly more expensive than both Amazon Echo and Google Home. It will also be more expensive than Sonos's entry-level multiroom speaker, the Play:1, and the similarly priced SoundTouch 10 by Bose. If Apple manages to beat the latter two in terms of sound quality and match Amazon and Google in terms of voice integration, the price could be justified for Apple device users. If not, many people will be better off combining their Sonos speakers with Amazon's cheap Echo Dot, as both companies are currently working on Alexa integration for Sonos.