Apple's AirPods Are a Hit 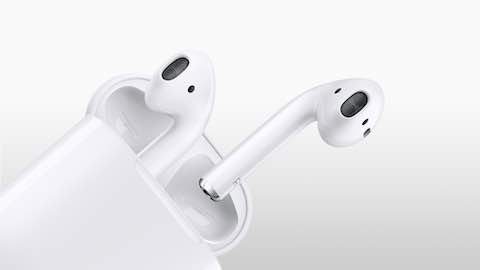 Apple's AirPods Are a Hit

Apple takes the wireless headphone market by storm with AirPods.

When Apple introduced its first wireless headphones alongside the iPhone 7 and 7 Plus in September, the reactions were mixed at best. While many were impressed with the technology behind the AirPods, their design drew a lot of criticism and the internet community was having a field day cracking jokes about the headphones' looks, price and the apparent risk of losing them.

Almost one month after the AirPods finally went on sale, it seems like Apple may be getting the last laugh after all.

According to Slice Intelligence, Apple has taken the wireless headphone market by storm. Slice's data, based on thousands of online shopping receipts, indicates that Apple accounted for 26 percent of wireless headphone e-commerce revenue since the AirPods' release -- more than any competitor. Considering the very limited availability of the AirPods, it seems save to say that this number could have been even higher if supply hadn't been as constrained as it was.

For Apple, it is of huge importance to get as many AirPods out on the streets as quickly as possible. The sooner a sufficient number of people walk around wearing the headphones, the sooner people will get used to their peculiar look and the (negative) novelty factor will wear off.

This chart shows the most popular wireless headphone brands in the U.S. before and after Apple's AirPods went on sale. 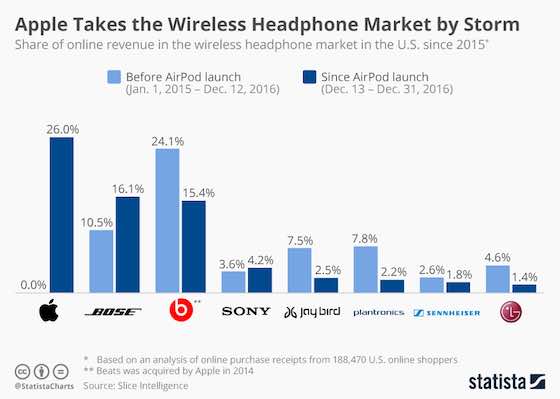 The Apple AirPods are Bluetooth earbuds made by Apple Inc. that resemble previous earbuds made by the company, only without wires. They have new user interactions such as removing an AirPod from one's ear causes playback to pause, and tapping them activates the Siri software agent. The AirPods can play audio from any device that supports Bluetooth, but work best with iOS 10.