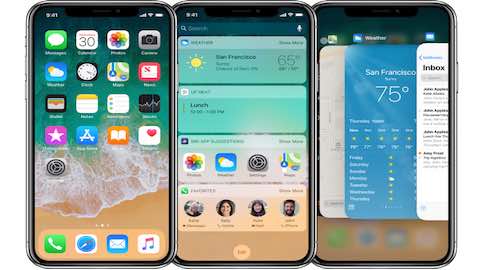 In the Steve Jobs Theater at Apple's fancy new headquarters, Apple presented a host of new products to its loyal fans and the world.

Due to an uncharacteristic series of leaks in the build up to the event, there weren't too many big surprises, but that didn't take away from the enthusiasm surrounding some of the key announcements.

The natural successor to the iPhone 7 series, the 8, would usually have been the headline act.

On this occasion though, ten years after the release of the first iPhone, CEO Tim Cook had something a little more special to overshadow the traditional flagship product. And according to a survey by 9to5Mac, overshadow is exactly what it did.

When asked which of the new products they plan to buy, users of the website overwhelmingly said they want the iPhone X. At the time of writing, 34 percent had voted for the X, compared to just 3.6 and 4.1 percent for the iPhone 8 and 8 Plus, respectively. Given that this is an open online survey, the methodology isn't ideal. It does however give a decent initial impression of how the product announcements have been received by the Apple community. 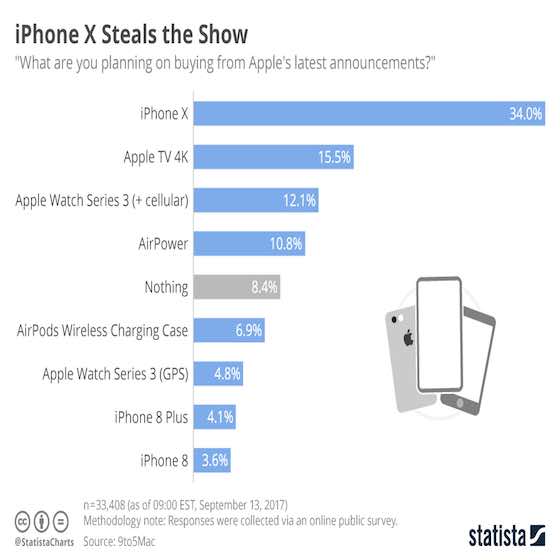 The iPhone's Importance to Apple

The iPhone Accounts For The Lion's Share Of Apple's Revenue

iPhones have always been expensive, proving vitally important to Apple and accounting for the lion's share of the company's revenue. Still, the iPhone X is expected to come with a hefty $1,000 price tag, making it the most expensive iPhone ever. iPhone revenue as a percentage of Apple's total revenue reached its peak in 2015 at 69 percent before falling to 55 percent in the third quarter of this year. It will be interesting to see how the steep price of the new device influences Apple's revenue stream in the months ahead. 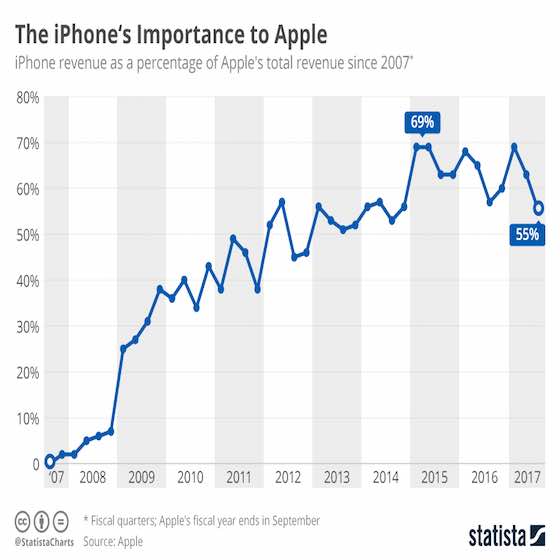 The iPhone Accounts For The Lion's Share Of Apple's Revenue