What The iPhone X Costs Around The World 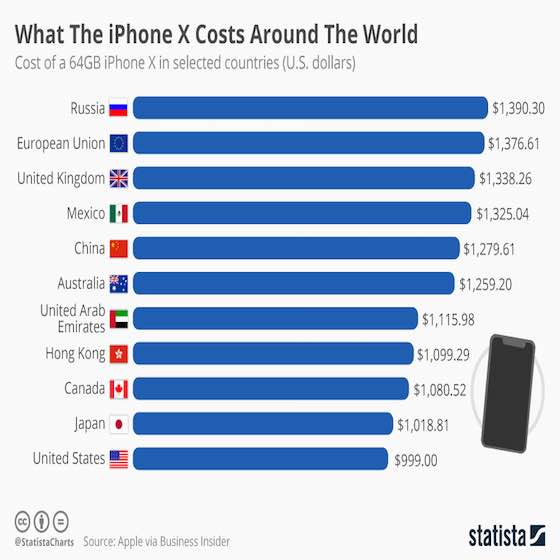 What The iPhone X Costs Around The World

Check out the prices of Apple's iPhone X around the world.

The iPhone X is the most expensive iPhone ever, costing a whopping $999 for the 64GB version and $1,149 for the 256GB version in the United States. With a certain degree of justification, some Apple fans feel that price is just out of reach. Just to put things in context: you could purchase a brand new MacBook Air for less than the cost of the cheapest iPhone X. American iPhone users are entitled to air their frustrations but customers in other countries will need even deeper pockets.

According to Business Insider, Russians will need to fork over $1,390.30 for an iPhone X. That's noticeably more expensive than the U.S. price and that trend is evident in many other countries. In the UK, the device costs 32 percent more than in the U.S., leaving many customers dismayed. Across the European Union, people will have to pay a hefty $1,376.61 for the new handset. Canadians will have a far better deal, having to pay about $20 more than their neighbors across the border.

Mobile Technology & Smartphones: "What The iPhone X Costs Around The World"