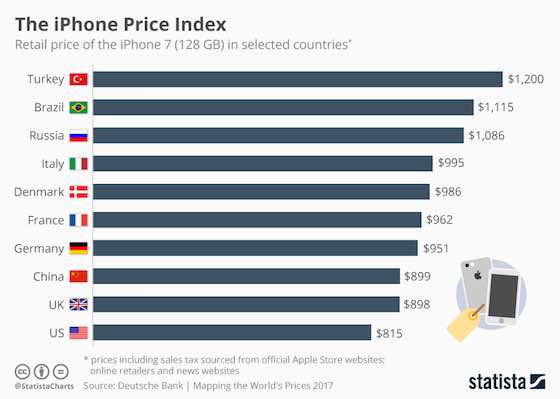 Ever wonder what the cost of an iPhone is across the globe? Check out the current iPhone price index.

The iPhone is not exactly cheap in the United States, but considering the prices that Apple fans have to pay in other parts of the world, the roughly $815 (depending on local sales taxes) that Americans have to shell out for an iPhone 7 (128 GB) seem like a regular bargain.

According to the latest issue of Deutsche Bank's "Mapping the World's Prices" report [PDF], the iPhone 7 costs $1,200 in Turkey, making it the most expensive place for Apple fans. Taking into account that Turkey's GDP per capita ($9,317 according to the IMF) is less than one sixth of that of the United States ($57,294) highlights how much of a luxury item Apple's flagship phone really is for Turkish consumers.

While Apple has always been a producer of high-end devices, the iPhone's price has recently become more of a problem with respect to the company's overseas success. With dozens of Android devices available at a fraction of the iPhone's price, even the appeal of the Apple brand may no longer be enough to win over emerging market customers.

The chart above compares the retail prices of the iPhone 7 across different countries.