What is the Right Age to Give a Kid a Smartphone? 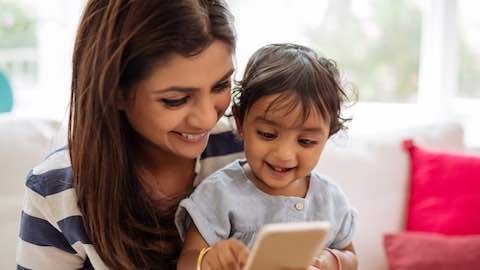 What is the Right Age to Give a Kid a Smartphone?

Nothing like starting ‘em young. According to the American Academy of Pediatrics, more than one-third of babies are playing with tablets and/or smartphones, and it turns out one in seven toddlers uses those same devices for at least an hour daily.

Kids are embracing technology earlier than ever before, but as an expectant mother of two, I wonder: What’s the right age to give them a smartphone to call their very own?

I decided to ask the best experts I could find: Moms.

For Chicago-based mother of five Jill Eckert McCall, those magic numbers were 9 and 10 years old, respectively. With McCall’s blessing, her two oldest daughters both received “hand-me-down” phones from their grandmothers, and now use them for various purposes. Her 9-year-old primarily uses the phone to play games but can’t use it to communicate with anyone. For her 10-year-old, McCall invested in a monthly plan enabling unlimited calls and texts but no data usage (though she can go online using Wi-Fi). “Our oldest tends to do activities after school and on weekends without us, so we needed more [communication options] to deal with pickup and drop-off changes,” she says. “Plus, it makes our life easier to get ahold of her no matter where she is. There don’t seem to be many [kids] in her age bracket without a phone.”

That reality didn’t sway Palo Alto-based parent Molly Blake. She had hoped to hold out on giving her 8- and 10-year-old daughters any type of cell phone, despite the fact that a number of her older daughter’s classmates had received iPhone 6 devices as presents for fifth grade graduation. However, a family medical emergency ultimately made the decision for her. “I had to go out of town on very short notice and was relying on friends and neighbors for help watching our kids after school,” said Blake. “We felt more comfortable giving them access to contact me or my husband directly in case our childcare fell through. Otherwise, I doubt I would have bought them a phone this early in the child-rearing game.”

Now, her two daughters share a smartphone — with some strict stipulations. The phone is “emergency only” with pre-paid minutes and a select contact list that includes only family and close neighbors. “I am well aware that they will be tethered to a smartphone far too soon, and I want to limit that as long as I can,” Blake says.

While there is no set guideline or minimum, a 2013 survey found that 56% of kids ages 10 to13 own a smartphone. And though there is no “right” age, there is a right way for parents to approach it — by setting ground rules that work well for your family.

The American Association of Pediatrics suggests setting mealtime and bedtime curfews for the use of media devices and limiting entertainment-related screen time to less than one or two hours daily. McCall agrees. “I’ve caught my kids a few times watching TV shows [on their smartphones] when they were supposed to be sleeping, so we now have a ground rule that they must turn their phones off at bedtime,” she says.

Her ultimate gauge for smartphone readiness? “You have to have a sense of whether your child is ready for the responsibility.”

Jen Jones Donatelli is a Los Angeles-based journalist and author who specializes in all things lifestyle — including digital life. Her work has been published in/on Variety, MSN, Redbook, Livestrong, Every Day Connected and many more.

Mobile Technology & Smartphones: "What is the Right Age to Give a Kid a Smartphone?"