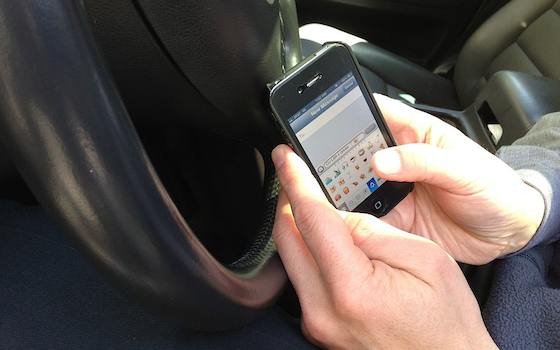 After all, you glance down only momentarily -- like you might glance at the radio display -- or you text only while sitting at a stoplight.

So you might be surprised to know that even under those circumstances, you could be on a path to catastrophe. Read on for important texting while driving statistics and to learn more about the dangers of texting and driving, texting while stopped ... and why some people just can't help themselves.

Dangers of Texting and Driving

According to the Virginia Tech Transportation Institute:

1. When you text and drive, your attention is taken away from the road for nearly five seconds, meaning that you travel the equivalent of a football field while not looking at the road when driving 55 miles per hour.

Texting-while-driving is now the leading cause of death for teen drivers. Given these alarming texting while driving statistics, most states in the U.S. have enacted laws banning texting while behind the wheel. But it appears the message isn't getting through for many drivers.

Texting while at a stoplight or in a traffic jam can be just as dangerous as texting while driving, according to David E. Meyer, Ph.D., professor of neuroscience at the University of Michigan and expert on texting and driving.

"There's a phenomenon called automation deficit," Dr. Meyer says. "If you drop one task and start up another, you lose your situation awareness, which is very important while driving."

This is hardly an abstract concern. "It might take you 5-10 seconds to get fully aware of the situation," he says, so "you're effectively driving while drunk for that time period."

Why People Continue to Text and Drive

Everyone knows texting and driving is dangerous, yet people continue to do it.

"Most people think they're immune to problems," Dr. Meyer says. "People find it hard to believe that bad things are going to happen to them until they actually do. We have a general illusion of immunity that extends far beyond texting, cell phones and driving."

The only way that this sense of immunity is shattered is when a bad thing happens -- and by then it's too late. The solution is clear: Put down the phone for when you drive. No matter what's tempting you to pick it up, nothing is so important that it can't wait until you've gotten off the road.

If you absolutely need to text or look something up, get off the highway and park your car in a safe spot. After you're done, put the phone back down -- and stay focused on the road.