Teens and Their Smartphones 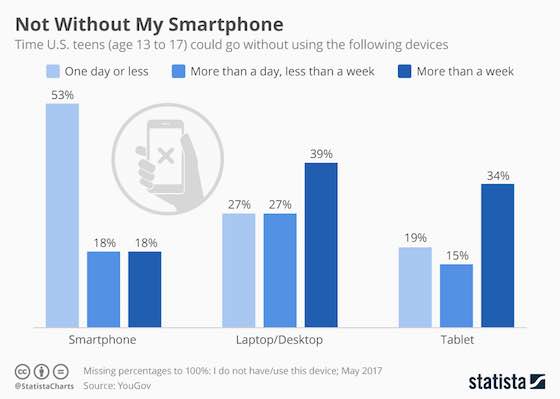 Teens and Their Smartphones

Not without my smartphone. This chart shows how long U.S. teens think they can go without communication devices.

Ten years ago, prior to the release of the first iPhone in June 2007, the world was a different place. There were no apps, no smartphone cameras, we weren't always online and our attention spans were probably longer than three seconds.

In less than a decade, smartphones have changed our lives in so many ways that it's hard to imagine how we used to live without them. In fact, many people can't imagine going a single day without their beloved phone. This is especially true for teenagers according to a recent survey by YouGov. As our chart illustrates, more than half of U.S. teens (age 13 to 17) state that they couldn't live without using a smartphone for more than a day.

While a smartphone is mandatory these days, other devices are optional for today's youths. More than a third of those polled by YouGov think they could go more than a week without using a laptop or a tablet.