Smartphone Market Not a Two-Horse Race 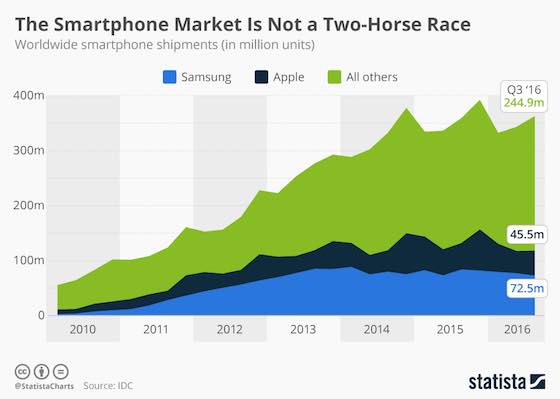 Smartphone Market Not a Two-Horse Race

Contrary to popular belief and what the amount of media coverage might suggest, the smartphone market is about much more than just Apple and Samsung.

While Apple and Samsung are still the world's smartphone market leaders, their combined market share amounted to no more than 32.5 percent in the third quarter of 2016, the lowest it has been in more than five years. Despite Apple and Samsung often dominating the headlines (both positive and negative), the smartphone market is not (and has never really been) a two-horse race.

According to IDC, Samsung and Apple saw their smartphone shipments decline by 13.5 and 5.3 percent, respectively, in the most recent quarter, while the remaining market grew by 7.7 percent. As demand for low- to mid-range handsets in emerging markets continues to surge, Chinese vendors, led by Huawei, OPPO and Vivo gradually close the gap on Apple, while also strengthening their presence outside of their home turf.

Market leader Samsung still has a significant lead over the competition, but it remains to be seen how significantly the problems surrounding the Galaxy Note 7 will hurt the company in the mid to long term.

With Apple's iPhone business stagnant and Samsung having lost its flagship phone to Batterygate, the upcoming holiday season seems like a good opportunity for Huawei and its peers to further expand their footprint and challenge the powers that be.

The chart above illustrates how the global smartphone market is not a two-horse race between Apple and Samsung.