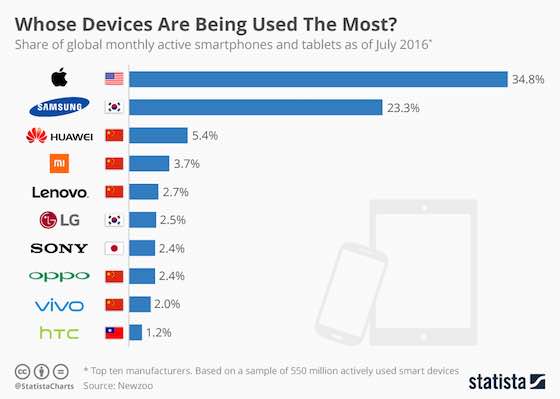 Whose devices are being used the most? This infographic shows the manufacturers with the largest share of global monthly active smartphones and tablets.

Apple smartphones and tablets are being used around the world more than the devices of any other vendor.

According to Newzoo, based upon their sample of 550 million actively used devices, The U.S. giant enjoys a 35 percent share of global monthly active users. While this shouldn't come as too much of a surprise, what is arguably more interesting about the ranking is the prevalence of Chinese companies.

Although none command shares comparable to Apple and Samsung individually, combined, Chinese vendors make up 30.2% of actively used devices worldwide, accounting for five of the top ten as shown in our infographic.