Landline Phones Are a Dying Breed 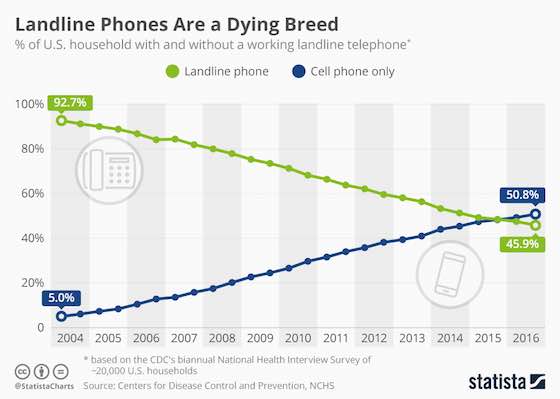 Landline Phones Are a Dying Breed

As smartphones have become a constant companion for most people in the United States, landline phones are rapidly losing their relevance.

In 2004, more than 90 percent of households in the U.S. had an operational landline phone -- now it's (significantly) less than 50 percent. That's according to data provided by the Centers of Disease Control and Prevention, which has been tracking phone ownership in the U.S. as a by-product of its biannual National Health Interview Survey since 2004.

If the trend continues at the current pace, and there's little reason to believe it won't, landline phones could soon become an endangered species, much like the VCR and other technological relics before it.

The chart above shows how landline phones are gradually losing relevance in the United States.