Do Not Break Your iPhone 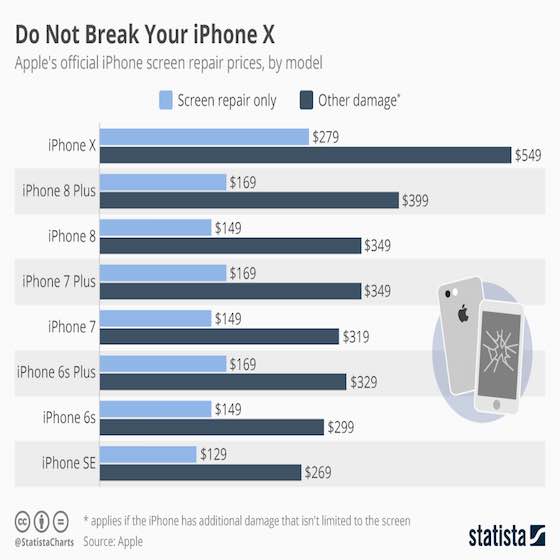 Do Not Break Your iPhone

This chart shows how much Apple charges to repair damages to different iPhone models.

With the iPhone X, Apple's re-designed anniversary iPhone, we'll see the familiar images of people lining up in front of Apple Stores around the world to be among the first ones to get their hands on the new device. Despite the X's lofty price -- it starts at $999 for the smaller 64 GB model, making it the most expensive iPhone to-date -- it's safe to say that Apple could sell a lot more units than it can possibly produce.

When the iPhone X became available for pre-order recently, it was sold out within minutes and the estimated delivery time currently stands at 5 to 6 weeks.

To all those quick or lucky enough to get an iPhone X anytime soon, our advice is: do not drop it.

According to Apple's official support website, the company's latest smartphone is just as expensive to repair as it is to acquire. Repairing the screen alone will set you back $279 or nearly twice what you pay for a new iPhone 8 screen. If you're unlucky enough to break more than just your screen, you'll be out $549 to get your phone fixed.

Mobile Technology & Smartphones: "Do Not Break Your iPhone"