The Best Ways to Make Your Phone Work for Your Family 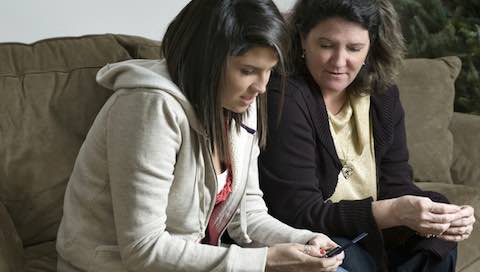 The Best Ways to Make Your Phone Work for Your Family

CTIA - The Wireless Association, surveyed more than 1,000 women in 2012 and found that almost 85% said wireless devices make the family feel closer when apart. An additional 80% said they use mobile devices to keep the family informed about each other's activities and locations, while 70% said it helps coordinate schedules.

We asked several moms for the best ways they use their phones to accomplish these goals. Here’s what we learned.

Elizabeth Fletcher and her 3-year-old daughter use FaceTime to stay connected with husband/father Mike, who travels a lot for business. “Elena is more focused and more verbal when she can see her dad’s face,” Fletcher said.

Susan Schuster shares “special moments” via her smartphone. For example, she recently used it to record and email a video of her 14-year-old son and his band playing “Fire and Rain” at a school concert. Susan also shares small news that’s easy to text but might not warrant a call or email. What’s more, she considers her phone a vital time and stress saver, especially when it comes to carpooling. “The kids text when they’re ready to be picked up, which makes it easier to plan and adjust,” says Schuster.

Kathleen Murray says texting has been a great way to communicate with her 15-year-old son, who otherwise might not want to talk to his mom. “When he was on his 8th grade class trip to D.C., he texted me from his hotel room the first night asking what we were up to at home,” says Murray. “He would never have picked up the hotel phone in front of his friends, but his cellphone made it easy and comfortable for him to reach out. And we’ve had fun ‘conversations’ through texts, especially with emoticons, that we wouldn’t have had any other way.”

Mom of four and small-business owner, Diane Hawe, says her phone gives her peace of mind. “When we’re in different time zones, it’s difficult to talk in person, so my kids check in with text messages such as ‘made it to the ice rink’ or ‘heading to Natasha’s to watch a movie.’ I can send a ‘have a great day’ message to my 15-year-old at 7 a.m. Eastern time and know she’ll see it when she gets up, even though I’ll be in a meeting by then. And I realize that I talk more to my daughter than my 13-year-old who doesn’t yet have his own phone. I have to make a point of phoning him on our home phone before I go to sleep at night.”

A word of caution: even though phones make it easy to connect with those you love, remember that as a parent, it’s important to respect boundaries. That’s what Annie Fox, author of Teaching Kids to Be Good People, advises. “Just because phones give you access to your kids, doesn’t mean you should invade their emotional space,” she says.

Freelance writer Bev Bachel lives in Minneapolis and uses her phone to talk, text and email friends and family around the world. She’s the author of What Do You Really Want? How to Set a Goal and Go For It!

Mobile Technology & Smartphones: "The Best Ways to Make Your Phone Work for Your Family"