Where People Can't Live Without The Internet 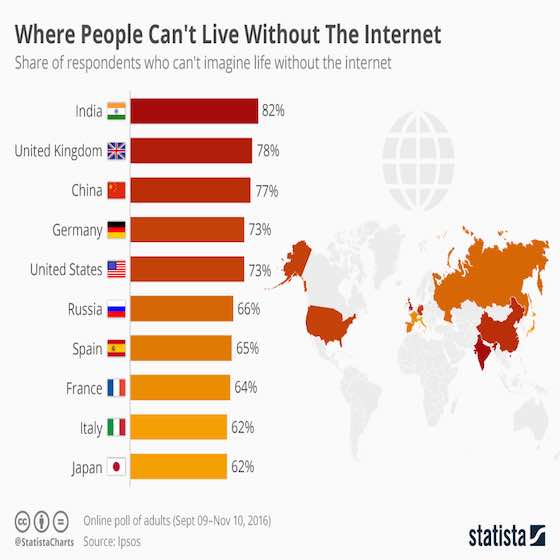 Where People Can't Live Without The Internet

This chart shows the share of respondents who can't imagine life without the internet by country.

Have you ever thought about what life would be like without the internet?

Given the volume of time people spend immersed in their smartphones, iPads and laptops, an unconnected life is pretty hard to imagine these days. For the majority of millennials, the time before the world wide web is now nothing more than a distant memory, a memory that's been eviscerated by the ubiquity and life-changing impact of connected technology.

Interestingly, it isn't just millennials who are losing touch with a world without smartphones, emails and social media. Research from Ipsos has found that society in general just can't live without the internet. 18,180 people were surveyed across 23 countries, with more than two thirds of them saying they cannot imagine a life that isn't prefixed by www dot. While 73 percent of Americans said they cannot imagine an unnconnected life, the highest share was recorded in India at 82 percent.

Internet & Social Media: "Where People Can't Live Without The Internet "