Who's Not Online and Why

Who's Not Online and Why 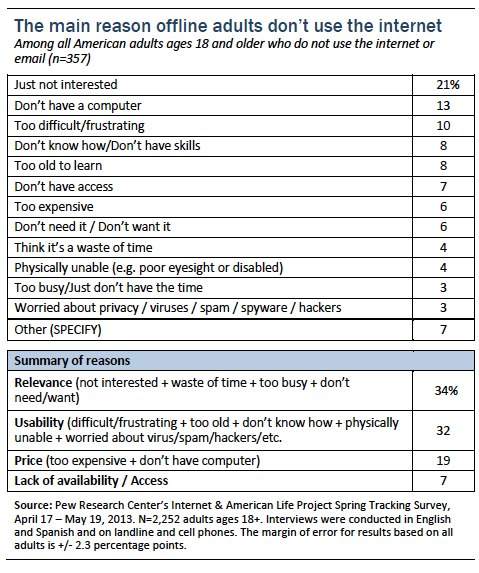 As in previous surveys by the Pew Research Center's Internet Project, internet use remains strongly correlated with age, educational attainment, and household income. One of the strongest patterns in the data on internet use is by age group: 44% of Americans ages 65 and older do not use the internet, and these older Americans make up almost half (49%) of non-internet users overall.

Though they themselves do not go online, these self-described non-internet users often report that the internet touches their lives:

The findings in this report are based on data from telephone interviews conducted by Princeton Survey Research Associates International from April 17 to May 19, 2013, among a sample of 2,252 adults ages 18 and older. Telephone interviews were conducted in English and Spanish by landline and cell phone. For results based on the total sample, one can say with 95% confidence that the error attributable to sampling is plus or minus 2.3 percentage points. More information is available in the Methods section at the end of this report.

Internet & Social Media: "Who's Not Online and Why"