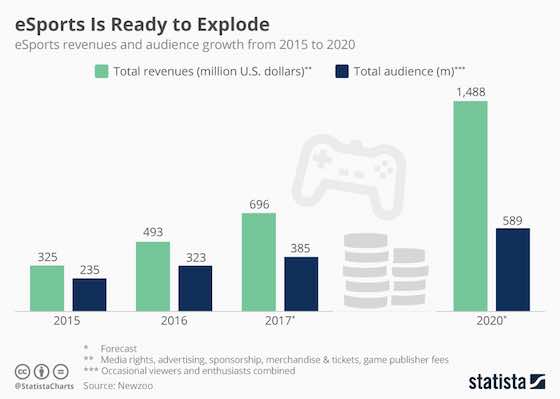 This chart shows revenues and audience growth for eSports from 2015 to 2020.

League of Legends (LoL) is the most played computer game on the planet. According to developer Riot Games, in 2016 there were 100 million people playing each month. League of Legends isn't just being played, though.

Of all of the many games subject to countless Let's Plays, League of Legends is also being watched the most - on the streaming platform Twitch last month, a total of 99.19 million hours of LoL was viewed. This ever increasing desire to not just play games but to watch them being played as well, is fuelling the rise in popularity of eSports.

The combination of an inherent competitive element and a huge global audience has led to the possibility for people to play LoL professionally. The largest tournament, the League of Legends World Championship boasted a first prize of over 2 million U.S. dollars in 2016 (to be split between the winning team). More importantly for the future of the sport, a total 43 million people watched the finals. It is figures like this that mean the world of eSports is expected to explode in the next few years.

League of Legends is just one platform with which the industry is forecast by Newzoo to generate revenues of 1.5 billion dollars by 2020 while amassing a global audience of 589 million.