Is Xbox One X Worth the Price? 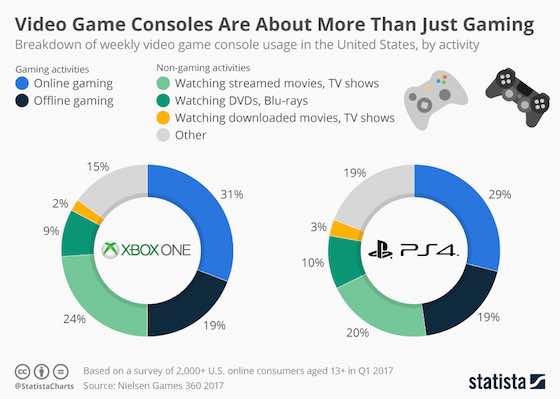 Is Xbox One X Worth the Price?

Prior to the start of the Electronic Entertainment Expo (E3), Microsoft unveiled its new video game console at a press event in Los Angeles on Sunday. The new console, named Xbox One X is the company's first foray into 4k gaming and will be compatible with all Xbox One games and accessories.

Despite being notably smaller than its predecessors, the Xbox One X is "the world's most powerful console" packing "40% more power than any other console", according to Microsoft. So much power comes at a price though: when the new Xbox, previously codenamed Project Scorpio, goes on sale on November 7, it will cost $500 in the United States -- $100 more than the PlayStation 4 Pro did when it debuted in November 2016.

Is the additional horsepower of the Xbox One X really worth the premium compared to the One S, which starts at $249 these days?

To the average gamer it may not be. As our chart based on Nielsen data illustrates, U.S. gamers on average spend roughly half of their console time doing anything but playing games. The Xbox One S, which supports 4k video playback, is more than capable of these tasks, so its powerful heir will mainly appeal to hardcore gamers for the time being.

Video Gaming: "Is Xbox One X Worth the Price?"