Does Nintendo Have an Awareness Problem? 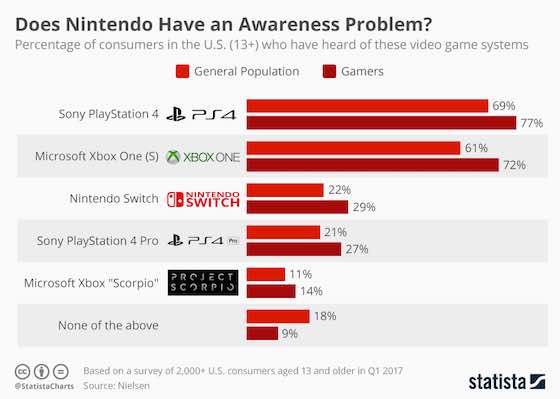 Does Nintendo Have an Awareness Problem?

According to Nintendo's most recent earnings report, its new video game system, the Nintendo Switch, is off to a decent start. Nintendo sold 2.74 million units of the Switch in its first four weeks on the market, putting it on par with its predecessors, the incredibly successful Wii and the not so successful Wii U.

Nintendo may have some work to do if it wants to translate the Switch's presentable start into long-term success though. According to Nielsen's annual Games 360 report, nearly 4 in 5 consumers in the United States have never heard of the Switch, which doesn't bode well for Nintendo's marketing strategy surrounding its launch in early March.

To be fair, the survey these findings are based on was conducted in the first quarter of 2017, which means the Switch may not have been in stores at the time (it was launched March 3). But the fact that 78 percent of the population and, more worrisome, 71 percent of self-described gamers had never heard of the Switch by that time, is not a good sign for Nintendo.

The chart above shows how many U.S. consumers have heard of current-generation video game consoles.

Video Gaming: "Does Nintendo Have an Awareness Problem?"