IBM unveiled a quantum processor of 127 qubits, or quantum bits, while startup QuEra, created by MIT and Harvard, announced an even more powerful machine of 256 qubits. This quantum leap for quantum computing far exceeded the power of previous quantum processors which had peaked at 100 qubits.

There are many companies in the race to develop quantum computers right now, and there has been a growing number of announcements in this area lately, suggesting a major push for the industry. With Azure Quantum and Braket respectively, Microsoft and Amazon already offer quantum computing services. Google even aims to create a quantum computer with 1 million qubits by 2029.

As our graph with data from the Statista Digital Economy Compass shows, quantum computing market size is expected to grow majorly as the technology develops in the current decade. The global quantum computing market could reach $9 billion in revenue by 2030, compared to $260 million in 2020. The annual average growth of this market could be more than 40 percent between 2020 and 2030, with development intensifying after 2025.

The enormous computing power offered by quantum computers will allow much more complex and faster data simulations, which could lead to technological breakthroughs in many sectors. Other than binary computers, whose bits are either showing as 1 or 0, quantum computers can display both states in a single qubit. 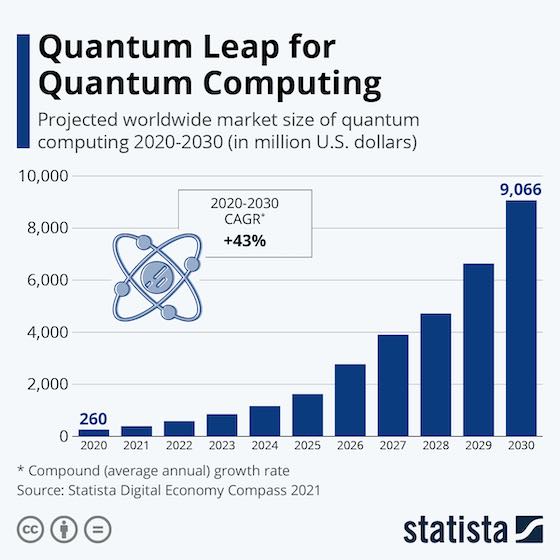