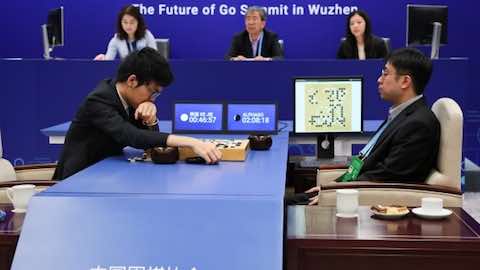 Absent new funding and a strategic vision, the United States might lose the race for supremacy in artificial intelligence research to China.

Recently, Eric Schmidt, the chairman of Google's parent company Alphabet, delivered a wake-up call: the unchallenged technological supremacy that the United States has enjoyed since the fall of the Soviet Union is over. The future will belong to countries that can surf the technological tidal wave of artificial intelligence, and while China's efforts appear up to the challenge, the United States is swimming in the wrong direction.

When China released its national AI strategic plan this summer announcing it would lead the world in AI technology by 2025, some in the military and Silicon Valley scoffed. They repeated the same tired cliché that China's tech industry and scientific researchers can't innovate, only copy. Schmidt, by contrast, sees China's AI ambitions as completely believable "You're crazy to treat them as somehow second class citizens" he said, addressing an audience full of American national security officials and AI researchers.

Rather than being significantly behind, Chinese programmers now routinely win international machine learning competitions. China's tech giant Baidu is unambiguously one of the global leaders in AI research, having developed an AI system with better-than-human speech recognition performance a year before any Western firm. China is not yet the overall leader in AI technology, but they are not far behind and catching up quickly.

The United States national security and tech communities urgently need to adjust to this new reality. China's military and commercial AI ambitions pose the first credible threat to United States technological supremacy since the Soviet Union. China's advantage is its strategic focus and funding to match AI's extraordinary opportunity. Beijing has not yet announced the funding total for their AI strategy, but it is already clear that the figure is in the billions. Top Chinese leaders, including Xi Jinping, have loudly trumpeted the strategy at nearly every opportunity. The AI strategy rollout resembles that of China's 2014 national semiconductor plan, which was ultimately allocated $150 billion over ten years.

Moreover, China's strategy recognizes the essential dual-use nature of artificial intelligence. The same core technological capabilities that enable commercial innovation are equally useful for warfare and espionage. Snapchat uses AI-enabled facial recognition technology to allow teenagers to send each other funny pictures. China uses the same technology in support of domestic surveillance. Jaywalk across a street in Shenzhen, and you're liable to have your face and name displayed onscreen nearby, along with a police reminder that "jaywalkers will be captured using facial-recognition technology."

In pursuit of China's AI policy of "military-civil fusion," the government has already established joint military-commercial research laboratories and testing facilities in areas like deep learning and autonomous vehicle development. The same facility might support testing of a luxury self-driving car one week, and a self-driving tank the next.

China's dominance of artificial intelligence technology and its military applications is not only credible but likely in the absence of a massive shift in U.S. policy. The United States needs a surge of focus and funding comparable to the "Sputnik moment" that launched the space race. Unfortunately, it is actually the Chinese who have accurately come to understand the Sputnik-like significance of recent progress in artificial intelligence. After all, Sputnik scared the United States into action because it simultaneously revealed that it was behind in rocketry and that rocketry was a critical technology. Despite China's astonishing AI progress, it overall remains behind the United States and its allies. For China, the 2016 match between the AlphaGo AI system (developed by Google subsidiary DeepMind) and Go world champion Lee Sedoul was a Sputnik moment.

Go, which has been played in China for thousands of years, is a major fixture of Chinese culture and strategic thinking. Unsurprisingly, AlphaGo's victory received greater attention in China than the United States. Many of China's leading computer scientists attended the matches in person. Like Sputnik, AlphaGo taught China both that AI was going to be the critical technology for the future of economic and military superiority and that they were behind the West. Only a year later, China released its national strategy for AI, which made funding AI research and utilizing AI technology throughout government a national priority.

Unfortunately, the Trump administration's latest budget slashes funding for basic research, including a 10 percent cut to the National Science Foundation's already meagre AI budget. U.S. policymakers must realize just how wrong their current approach to the AI revolution is. Doing so will require convincing the military and tech industry that their decades-long dominance is truly at risk. Perhaps such a wake-up call would require a Sputnik moment, but if the United States waits for one it will likely be too late.

Gregory C. Allen is an adjunct fellow at the Center for a New American Security. He is the co-author of "Artificial Intelligence and National Security," a study on behalf of the U.S. Intelligence Advanced Research Projects Activity (IARPA).You can follow him @Gregory_C_Allen.