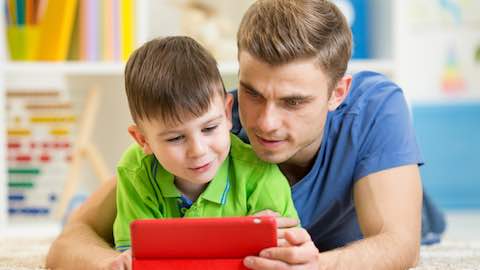 You might have of grown up in the era of Speak & Spell, or the excitement of the book mobile coming to school, but these days kids as young as three have access to a whole new landscape of apps that can engage them in the love of reading via a tablet or smartphone.

Tina Wheeler, a former teacher and mother of two from Campbell, Calif., says even though she loves helping her older son learn how to read the old-fashioned way, she’s also tried a few apps to get him engaged. “It was really just identifying and reinforcing letters and letter sounds,” she says. “They were super fun.”

Here are the top apps many parents love for their budding readers:

A mobile-ready site by the ever-popular Reading Rainbow, Skybrary allows your kids to access more than 500 books, follow along with narrated books, and it provides a dashboard for parents to check out how many books they’ve read and the time they’ve spent reading. This site offers a 14-day free trial to sample the site.

Montessori education is rooted in children being self-directed and this award-winning app (featured in an Apple campaign) is no different. Developed by Montessori teachers, your kids will learn how to sound-out letters, build a rich vocabulary, “write” words, and recognize words phonetically using a moveable alphabet.

Your kids can access this service from any device (running Flash version 10.2 or higher), and it’s advertising free with no external links. ABCmouse combines games, videos and puzzles, offering learning paths for six levels of reading—from beginner to proficient. It even offers kids rewards to keep them engaged.

This app is based on a popular website that was developed by a child who was struggling to learn to read who’s now a PhD and artist. Starfall allows your kids to learn phonics via songs, videos, mini books and cartoon characters.

No matter which reading app you select, you can rest assured that your kids are learning and growing to love reading—while having a bit of fun.

Jeremy Cleland has been a spokesperson for several Silicon Valley startups, like Tesla Motors, and spearheaded global stories about technology featured in media like Vice, Time magazine, Forbes and Wired.com. He’s also the dad to a 5-year-old who is already more tech-savvy than him.