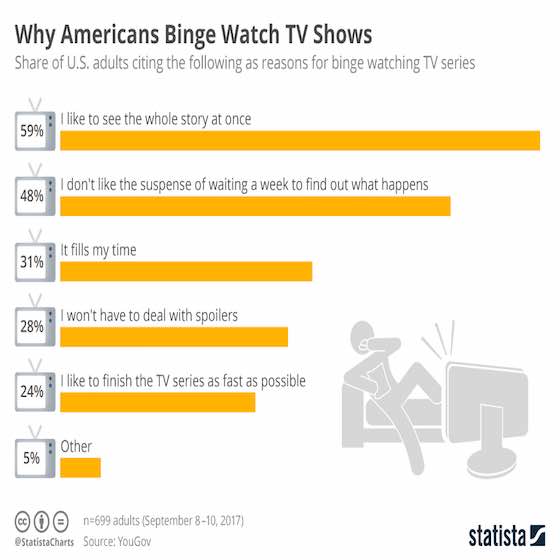 Here's why people enjoy spending so much time in front of their screens, binging on their favorite television series.

People will enjoy having more time to stream their favorite TV shows over Hulu, Netflix and Amazon Prime. For some, that will mean binge watching. Generally defined as the act of consuming multiple episodes or seasons of a show on demand, 58 percent of Americans have binged watched at one time or another, according to YouGov. Of that number, 72 percent say they prefer it as their regular means of consuming TV entertainment.

Why do people enjoy spending so much time in front of their screens, binging on TV series?

YouGov found that nearly six out of every 10 American binge watchers likes to see the whole story at once. 48 percent say they simply cannot handle the suspense of waiting an entire week to find out what happens. Interestingly, 31 percent of people are driven to binge watch just so that they can fill their time.