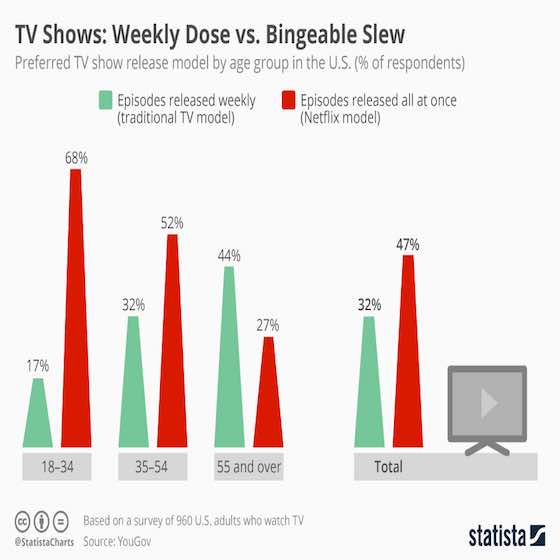 The dawn of DVD box sets and streaming services such as Netflix has brought about a new way of consuming TV shows -- binge-watching.

While traditional TV channels used to release new episodes of their shows episode by episode, week after week, consumers are now often granted access to an entire season worth of episodes at once, able to watch them whenever they please.

While this takes away the thrill of waiting alongside millions of fellow fans for a new episode of your favorite show, the new practice of releasing a slew of episodes at once does grant viewers an unprecedented amount of freedom and flexibility.

According to a recent survey conducted by YouGov, young viewers are particularly fond of this new way of consuming TV content. 68 percent of respondents aged 18-34 say they prefer the “Netflix way” of releasing new shows, while only 17 percent say that they prefer the traditional way of week-by-week releases. Older Americans see things differently: 44 percent of those aged 55 and older still prefer TV shows to be released episode by episode while just 27 percent like to have access to all episodes at once.