The Uncertain Future of Traditional TV 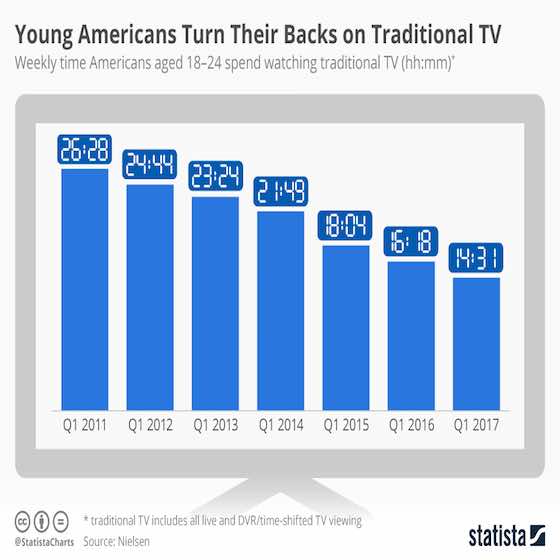 The Uncertain Future of Traditional TV

These charts show the average weekly smartphone and TV usage of adults in the United States and how much time per week young Americans spend watching TV.

With the emergence of streaming services such as Netflix, Hulu and Amazon Prime Video, traditional TV is finding itself under increased pressure to retain its place as the go-to medium for entertainment, distraction and information.

While people still spend more time watching TV then they do using any other medium, there are signs that indicate its future may not look quite as bright.

As figures from Nielsen's quarterly Total Audience Report indicate, young Americans are watching less and less TV. Since Q1 2011, the time Americans aged 18-24 spend watching TV dropped by more than 40 percent. In the first quarter of 2017, young Americans spent an average of 14 hours and 31 minutes a week watching traditional TV, down from 26 and a half hours in 2011. 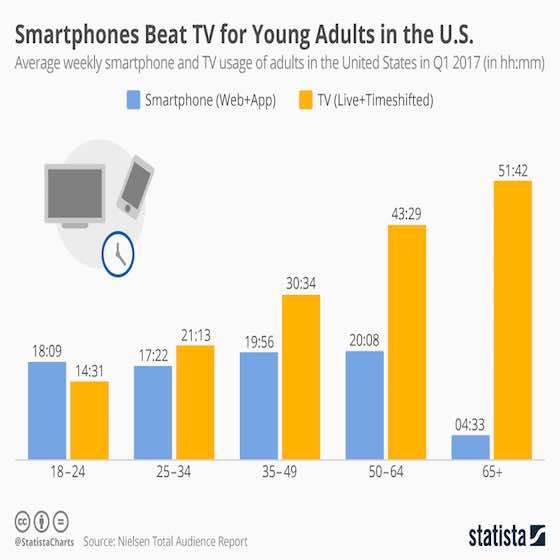 Smartphones Beat TV for Young Adults in the U.S.

Smartphones Beat TV for Young Adults in the U.S.

Despite the rise of mobile devices in recent years, there has always been one undeniable truth: TV was always king of media consumption. According to Nielsen's most recent Total Audience Report, that truth is now beginning to fade.

While American adults on average still spend roughly twice as much time watching TV as they do using apps or browsing the web on their phones, that no longer holds true for all age groups. Those aged 18 to 24 now spend significantly more time on their smartphones than they do watching traditional TV (both live and timeshifted).

As our chart above illustrates, TV remains the most important screen for everybody else, but it is the beginning of a paradigm shift that will likely see television lose the position it has held for decades. Smartphones, tablets and online services will gradually change people's media consumption habits until eventually, the idea of having to sit down in front of the TV at a fixed time to watch anything but live sports will be nothing but a distant memory.