The Best TV Shows You Should Watch Without Your Kids 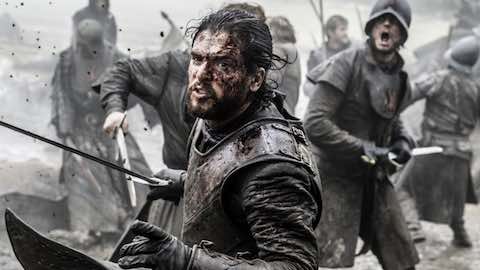 The Best TV Shows You Should Watch Without Your Kids

What are the best shows on TV for adult audiences only? PrettyFamous ranks the top 25 TV series with a TV-MA rating.

In today's world of streaming, downloading and subscribing, we are inundated with different television shows to choose from. For those of us with kids, sometimes we want to take a break from watching age-appropriate shows and delve into the dark, creepy or funny shows directed only for adults. TV Guidelines uses the TV-MA rating for the shows with the most extreme language, violence and nudity -- many shows out there exhibit all three.

PrettyFamous, an entertainment site by Graphiq, found the 50 best TV shows with a TV-MA rating. TV shows with more than 30,000 votes on IMDb were ranked by their Smart Rating, a score out of 100 that takes into account IMDb ratings and IMDb votes, as well as Emmy awards. Ties were broken by using the number of IMDb votes.

Networks such as HBO, Showtime and FX don't have to play by the rules of basic cable, and most of the shows on this list originally aired on one of these networks. Netflix is new to the television game and also producing intense dramas with steamy sex scenes and graphic violence. However, these series don't rely on adult content for shock value, but rather use themes to accurately depict the story and engross the audience. From historical dramas, bizarre sci-fi, riveting murder mysteries to comedy news satires, there are many great entertainment choices to choose from when the parental controls are turned off.

After "Seinfeld," creator Larry David moved on to "Curb Your Enthusiasm." The show won a Golden Globe in 2003 for best television series (comedy or musical) and was ranked by IMDb as the 89th best television show ever.

Aaron Sorkin (known for writing the screenplay for successful films such as "Moneyball" and "The Social Network") created HBO's "The Newsroom." The show is known for its stellar performances and moving dialogue.

Actor David Duchovny transitioned quickly from an FBI agent facing extraterrestrials to a depressed alcoholic with a sex addiction in Showtime's "Californication." The show is based off of the American author Charles Bukowski.

"Narcos" is a fictionalized account of Colombian drug lord Pablo Escobar. Only one season thus far has premiered on Netflix, which went over well with critics and audience members. "Viewers will be sure to binge watch with a gusto akin to the clientele that snorted up Escobar's finely produced powder," one critic writes.

The town of Deadwood, South Dakota is reeling after the massacre of Little Big Horn. According to IMDb, the f-word is used 2,980 times throughout its three seasons. Along with copious amounts of sex and violence, it's obvious why "Deadwood" got its TV-MA rating.

HBO's historical drama about ancient Rome tells the story of Julius Caesar and his sordid time in power. The show lasted two seasons before creator Bruno Heller moved on to make the critically acclaimed series "The Mentalist" and "Gotham."

When teenagers were going through the Twilight craze, HBO created a vampire series strictly for adults. Anna Paquin won a Golden Globe in 2009 for her role as Sookie Stackhouse, the woman who gets involved with the strange, creepy counterculture. Paquin also married co-star Stephen Moyer in 2010.

"Six Feet Under" is another adult show produced by HBO about a family running a funeral home while their relationships simultaneously crumble. Throughout its five seasons, "Six Feet Under" won three Golden Globes and is ranked at number 64 in IMDb's top TV shows list.

Comedian Louis C.K. created and stars in this FX original series based off of Louie's own personal experiences in New York City. All five seasons received over an 85 percent rating on Rotten Tomatoes, with seasons two and three boasting a 100 percent rating from critics.

"Sons of Anarchy" chronicles the life of Jackson Teller (played by Charlie Hunnam) as he struggles to balance parenthood with his involvement in a tough motorcycle gang.

14. Orange Is the New Black

Originally, this Netflix show was loosely based off the novel "Orange Is the New Black: My Year in a Women's Prison" by Piper Kerman. It has taken some bizarre turns in recent seasons, but continuously receives over 90 percent ratings each season and has been renewed through 2019.

"The Wire" explores the criminal world of Baltimore from both the law enforcement and criminal side. Every season except season one is rated 100 percent by critics on Rotten Tomatoes, and it ranked fifth on IMDb's list of top rated TV shows.

"'Entourage' offers winning characters worth watching, the chummy male equivalent of 'Sex and the City,'" one critic wrote. This bro-show is loosely based on actor Mark Wahlberg's experiences breaking into Hollywood. Wahlberg is an executive producer of the show, and often makes guest appearances.

The series "Fargo" loosely follows the story from the successful 1996 Coen brothers film. Strange crimes center around Fargo, North Dakota and while there is no wood-chipper scene, there are plenty of brutal murders to give the show its TV-MA rating.

Robin Wright and Kevin Spacey deliver stellar performances in Netflix's political thriller "House of Cards." They have each won Golden Globes for their roles as Claire and Francis Underwood, two power-hungry, manipulative players in the corrupt D.C. jungle.

Both seasons of "True Detective" display horrifying, disturbing images and it's no surprise why this show is intended for mature audiences only. Season one, which stars Matthew McConaughey and Woody Harrelson, did better with critics than season two.

5. It's Always Sunny in Philadelphia

Since 2005, the crew from "It's Always Sunny in Philadelphia" has been making us laugh with crude jokes and hilarious observations about life's absurdities. FX has renewed the season through 2019, which would bring the show to a 14-season run.

Of course, a series on Showtime about a serial killer garners a TV-MA rating. "Dexter" ran for eight seasons, engrossing fans as Dexter murdered 117 people throughout the series, but also tried to be "good" by weeding out the nefarious killers in Miami.

Based off of the long-running comic book series, "The Walking Dead" continues to explore the post apocalyptic world of "walkers" (the term "zombie" is never used in the series). British actor Andrew Lincoln will have to keep his gritty American accent for at least one more year -- AMC has renewed "The Walking Dead" for a seventh season.

HBO's "The Sopranos" follows fictional mob boss Tony Soprano (played by James Gandolfini) and his foray into the crime world in New Jersey. Apparently, Gandolfini was contacted by real-life criminals who praised him for the show's accuracy.

With six completed seasons, "Game of Thrones" does not shy away from adult themes -- and audiences cannot get enough. We have seen a young child burned to death, a newborn baby eaten by dogs, incest, rape, beheadings and torture. However, the show goes beyond brutality with strong characters and an intricate plot that leaves fans wanting more.

"The Best TV Shows You Should Watch Without Your Kids"