Is TV's Reign Nearing Its End? 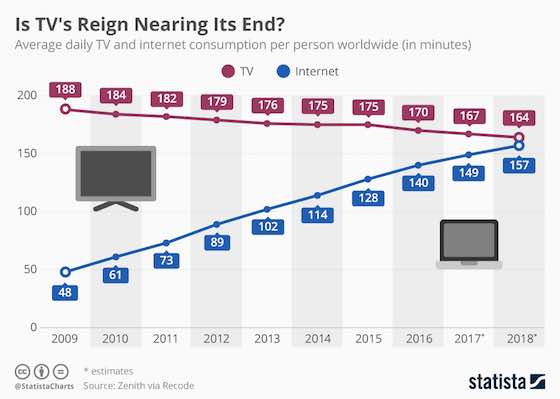 Is TV's Reign Nearing Its End?

Averaging more than 7.5 hours a day, people around the world spend more time watching, streaming, listening and generally consuming media than ever before. That's according to data recently published by Zenith, which also points out an interesting trend in media consumption.

For decades, TV was the undisputed number 1 in terms of daily media usage, and it still is. However, as internet consumption (both mobile and desktop) has risen sharply over the past decade, it looks as though TV's reign could soon be coming to an end.

According to Zenith, the gap in daily consumption, which was 30 minutes last year, could shrink to just 7 minutes by 2018 and possibly vanish a year later. In line with the old adage "money follows eyeballs", online advertising expenditure is also expected [PDF] to exceed TV ad spend come 2019.