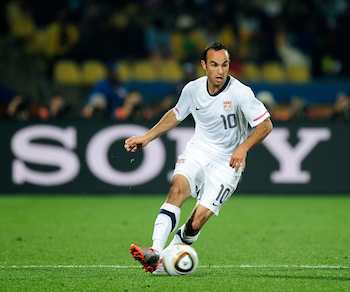 Donovan will headline the team that will face reigning European champions Chelsea July 25 at PPL Park in Chester, Pennsylvania.

Donovan has been selected for the All-Star game every season since his debut in 2001. He passed MLS stalwart and former US national team defender Eddie Pope, who appeared in 11 All-Star Game during his career.

Donovan is joined by Galaxy teammate David Beckham as well as New York Red Bulls star Thierry Henry on the team's First XI. Beckham makes his third All-Star appearance and Henry returns for his second stint since joining the league in 2010.

Aside from Beckham, De Rosario and Donovan, Graham Zusi of Sporting Kansas City has been selected as midfielder.

D.C. United head coach Ben Olsen, who was given the All-Star head coaching job after original selection Peter Nowak parted ways with the Philadelphia Union earlier this season, will select the starters based on player availability and tactical considerations.

Two selections by MLS Commissioner Don Garber and the complete game day roster will be announced on July 15 during halftime of the New York Red Bulls vs. Seattle Sounders game.