Why is the 2022 Qatar FIFA World Cup So Controversial? 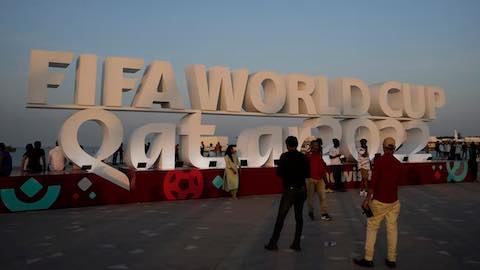 The 2022 men's FIFA World Cup promises to add to Qatar's status as the Middle East's sporting hub and a burgeoning global power in the business of sport.

Although Qatar is hardly renowned as a sports performer, it has brought the world of sport to its door. Indeed, sport -- along with tourism -- is expected to be a key part of Qatar's economic future given its finite reserves of oil and gas.

Yet Qatar's status as World Cup host has been highly controversial. Why is that so? And how have FIFA and Qatar manoeuvred to deflect criticism?

In 2010, Qatar was the surprise winner of a FIFA vote to stage the 2022 World Cup, a decision critics put down to nefarious influences beyond the bid itself.

It was difficult to reconcile how Qatar, with average daytime summer temperatures over 40℃, was an ideal environment for this tournament.

A few years later, in an unprecedented pivot, FIFA allowed Qatar to move the event to its winter, even though that would disrupt prestigious football schedules in the northern hemisphere.

So, despite some critics calling for the World Cup to be taken from Qatar, this spatially tiny Gulf country with an exceptionally rich economy from oil and gas, had defiantly retained the imprimatur of the FIFA family.

However, FIFA's endorsement of Qatar was soon under renewed pressure, for two main reasons.

First, critics reasserted their dismay that the host nation is hostile to same-sex culture. In 2010, FIFA was well aware of Qatar's position that homosexuality is an affront to Islam, but it also accepted that Qatar would not resile from its cultural norms.

In response, then FIFA president Sepp Blatter clumsily quipped that LGBTQI+ football fans might "refrain" from amorous activities while in Qatar.

Second, Qatar had allowed vulnerable foreign workers -- who were central to building World Cup infrastructure -- to be exploited, with employment and living conditions consistent with modern slavery.

While it's difficult to procure precise figures, a February 2021 investigation by The Guardian estimated there were around 6,500 workplace fatalities in the decade after Qatar was awarded the World Cup. While not all were working specifically on tournament facilities, experts say most were employed on infrastructure developments that support the event.

FIFA was well aware that stadium construction would rely on the import of foreign labourers under the Middle East's notorious "kafala system", which empowers wealthy employers to oppress impoverished workers.

The Western-led reticence towards Qatar being anointed World Cup host undoubtedly spurred an awakening of what has been described as "FIFA's sensitivity to human rights". Two developments stand out.

First, facing concerted pressure about human rights, the FIFA statutes were amended in 2013 to declare that discrimination on the basis of "sexual orientation" is "strictly prohibited and punishable by suspension or expulsion" from football.

However, World Cup hosts Russia (2018) and Qatar (2022) already held contracts to stage the event in accordance with their own laws and customs, which are hostile to homosexuality. FIFA, by choosing not to press the issue of sexual freedom with either scheduled host, was in effect delaying the application of the anti-discrimination measures embedded in its amended statute of 2013.

Second, facing concerted pressure from worker rights bodies, FIFA committed to upholding the conventions of the International Labour Organisation. FIFA's inaugural 2017 Human Rights Policy therefore accorded with the UN Guiding Principles on Business and Human Rights. Once again, though, this was a new position -- bid agreements for Russia and Qatar were already signed.

FIFA could, if it chose, threaten to withdraw either host contract. But it had no appetite for logistical consequences or potential legal impacts. Instead, in the case of Qatar, FIFA comforted itself by advocating for reforms to the working conditions of foreign labourers.

Incremental improvements have indeed followed, notably a move away from the draconian kafala system.

However, according to a report by Equidem, a human rights and labour rights charity, the exploitation of migrant workers has continued, meaning that promised reforms have not been adequately implemented.

What's more, Qatar has fiercely rejected claims by human rights bodies -- along with FIFA -- that it ought to compensate the families of foreign workers killed on World Cup infrastructure projects.

Qatar has gone to extraordinary lengths to stage the World Cup, spending an estimated US$100 billion on infrastructure. Daytime winter temperatures can often reach around 30℃, so all eight stadiums (seven of which are new) will be air-conditioned to at least 24℃.

To move patrons around venues, the Doha Metro railway has been created, supplemented by a new bus transit system.

Eleven luxury hotels opened just prior to the World Cup, with the volume of rooms across Qatar tripling over the past decade. Yet this will be insufficient to house the near three million fans who are slated to travel to Doha.

Adding to the mix are cruise ships and mini "floating hotels", as well as tiny porta cabins and tents in the fan village.

Qatar claims the World Cup will be carbon neutral courtesy of renewable energies and carbon offsets, such as the ten-fold growth of green spaces around Doha, including over one million new trees.

Some climate experts have questioned the robustness of such claims.

But the deployment of recycled shipping containers in stadium construction, as well as the planned donation of temporary seating in several arenas, speak to Qatar's rising commitment to sustainability.

Qatar, though staging a global event, is doing so through a local prism. It's the first Muslim country to host the World Cup, and therefore brings its own world view to FIFA's showpiece.

Two issues are likely to test both the hosts and football fans.

First, the World Cup has long been associated with the demonstrative consumption of copious amounts of alcohol. Although alcohol is available in Qatar, drinking in public is against the law.

This position has been modified for the World Cup: alcohol will be sold in stadium compounds, but not during games. Fans will have to quench their thirst in a time frame of three hours before kick-off, and one hour after kick-off.

Meanwhile, though, Qatar's 40,000 capacity Fan Zone allows the sale of alcohol from 6:30pm to 1:00am, so watching evening games on a big screen while chugging a beer is feasible. But those who drink too much risk being temporarily housed in "sobering tents".

Second, Qatar has tried to assure football fans of any sexual orientation they will be safe and welcome, though with the caveat that public displays of affection -- of any kind -- are generally "frowned upon" locally.

As with alcohol, it now appears Qatar will temporarily accommodate different standards. According to a report by a Dutch news site, which said it had seen documents shared between tournament organisers and Qatari police, people from the LGBTQI+ community who "show affection in public will not be reprimanded, detained, or prosecuted. They may carry rainbow flags. Same-sex couples can share a hotel room".

The world has come to Qatar and, for a time at least, it's adjusting its local norms. A more enduring World Cup legacy has been incremental reforms to the treatment of foreign workers, though an absence of an effective remedy for the families of deceased workers continues to raise a bloody red card upon Qatar.