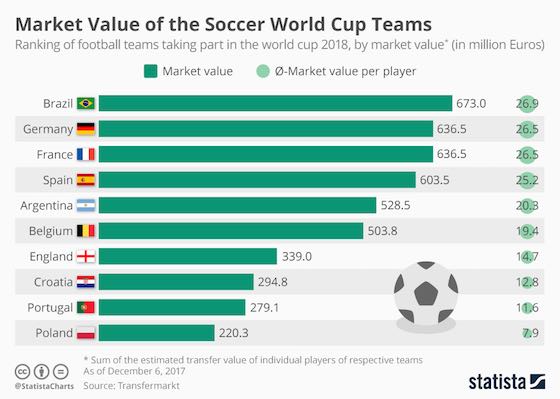 Brazil is sending the most valuable team to the FIFA world cup 2018 in Russia. German transfer market portal Transfermarkt estimates that the 25 players on the team have a combined market worth of 673 million euros. Germany and France share the second spot with 636.5 million euros each.

One big difference between the three teams is that of most of the Brazilian players don't play in their home league (88 percent), while only 41.7 percent of the German national players are employed abroad and 58.3 percent of the French players score their income in foreign leagues.

England is in the top ten most valuable teams too. Its cadre is worth some 279 million euros. However, it's one of the world cup teams with most players playing at home. Only 4.3 percent play on foreign pits.