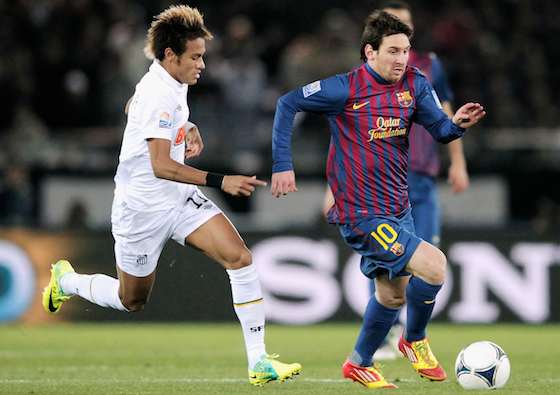 The Barcelona forward garnered 41.60 percent of the votes from national coaches, captains and journalists to edge Real Madrid's Cristiano Ronaldo and teammate Andres Iniesta, who got 23.68 percent and 10.91 percent, respectively.

"To tell you the truth, this is really quite unbelievable," Messi said during the awards ceremony. "The fourth award that I have had is just too great for words."

"I would like to recognize my other colleagues from Barcelona: Iniesta, it has been great to train and play alongside you. I would also like to recognize all of my friends in the Argentinian national team," he added.

Messi ended the calendar year with 91 goals to his name, erasing the previous record mark of 85 set by Germany's Gerd Muller in 1972.

The forward also set a new record for the European Champions League by scoring 14 goals during the 2011-12 campaign, a period when he became the first man to score five goals in a game in the competition against Bayer Leverkusen.

Ronaldo, the 2008 FIFA World Footballer of the Year, settled for second place for the third time, after runner-up finishes to Messi in both 2009 and 2011.

Meanwhile, Vicente del Bosque was named Coach of the Year after leading Spain to a successful title defense in the European Championship.

United States striker Abby Wambach won the FIFA Women's World Player of the Year award for the first time while her former coach, Pia Sundhage, who led the United States to its second Olympic gold medal at London 2012, was named Women's Coach of the Year.