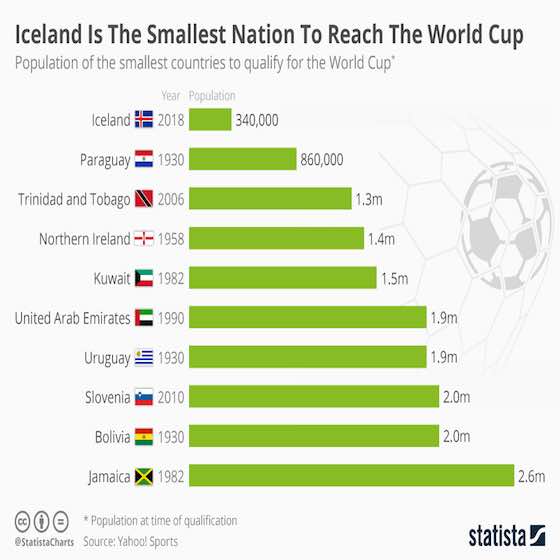 People in Iceland are looking forward to another summer packed with thrilling action on the soccer field after their national team qualified for the 2018 World Cup. Here's the 10 countries with the lowest population to ever qualify for FIFA's World Cup finals.

Iceland beat Kosovo 2-0, securing the precious ticket to the 2018 FIFA World Cup tournament in Russia, continuing one of soccer's greatest fairytales. Iceland's emergence as a soccer power has been surprising given that the country only has a population of 340,000 people. Kosovo has a population nearly six times larger and it's roughly equivalent to the number of inhabitants in Santa Ana, California. Despite its serious shortage in manpower, however, Iceland has managed to punch well above its weight on the soccer pitch in recent years.

Iceland's remarkable performances can be attributed to a plan formulated almost two decades ago. That saw heavy investment in indoor sports complexes and heated pitches as well as a sharp focus on education and coaching in particular. That resulted in the country producing some 600 qualified coaches, 400 of whom have a UEFA B license, equating to one coach per 825 inhabitants. England has one coach per 11,000 inhabitants.

According to Yahoo! Sports, Paraguay competed in the 1930 World Cup with a population of 860,000 people. However, that tournament did not actually involve qualification so it is better to compare Iceland's achievement with that of Trinidad and Tobago. The Caribbean island nation qualified for the 2006 World Cup in Germany with a population of 1.3 million people. As impressive as that achievement was, Iceland have made it to Russia with less than a quarter of Trinidad and Tobago's population.