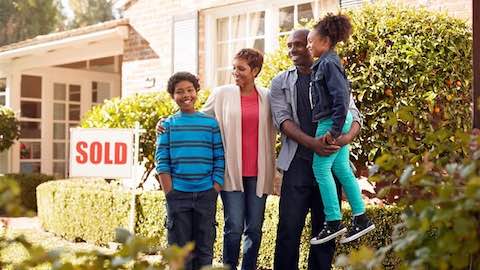 (BPT) - More than any other demographic group, African-Americans perceive home ownership as an integral component of the American Dream, and a way to build security and wealth for their families, according to a recent survey.

The poll by Ipsos Public Affairs, conducted on behalf of Wells Fargo, found that 90 percent of African-Americans said home ownership would be a dream come true, and more than half were considering buying a home within the next two years.

However, African-Americans currently have the lowest rate of home ownership among ethnic minorities - just 42 percent, or 20 points short of the national rate, according to U.S. Census Bureau data. African-Americans are expected to represent the third largest segment among new households (renters and owners) in the U.S. by 2024.

"Americans of every demographic aspire to home ownership, but this survey indicates African-Americans place high value on the emotional and financial benefits of owning a home," says Brad Blackwell, executive vice president and head of housing policy and home ownership growth strategies for Wells Fargo. "Unfortunately, myths about down payments and credit often deter people from inquiring about loan options."

Like many Americans, African-Americans want to own homes, but are often challenged by factual and perceived barriers. Real barriers include tight credit markets, lack of affordable inventory in many areas and underemployment or unemployment.

Perceived barriers are directly related to a lack of experience with the homebuying process. For example, in the Wells Fargo survey, nearly half of African-Americans believed a 20 percent down payment is necessary to buy a home. However, many home loans permit down payments of less than 20 percent. Some are as low as 3 percent.

Mortgage approval is not contingent on full-time employment, either. Homebuyers need only be able to demonstrate their ability to repay their mortgage loan, regardless of whether their income comes from a full-time or part-time job. However, 54 percent of African-Americans believed homebuyers must have full-time jobs in order to qualify for a mortgage. In some loan programs, income from others who will live in the home, such as family members or renters, can also be considered.

Meanwhile, if you want to purchase a home, you can maximize your chances of getting approved for a mortgage with several important steps, including:

Debt-to-income (DTI) ratio is an important factor lenders consider in mortgage applications. This ratio compares your total monthly debt to your monthly income. Keep your DTI below 36 percent by paying down credit cards, auto loans and student debt.

Even though you don't always need 20 percent down in order to qualify for a mortgage, having savings can still positively affect the mortgage process. Some financing programs allow qualified homebuyers to secure a mortgage with as little as 3 percent. Or, you may qualify for programs that benefit veterans if you've served in the military.

Be able to prove income

Although you don't need a high income to qualify for a mortgage, you will need to be able to document your income with W2s, tax returns and other paperwork.

Build up an emergency fund

Unexpected expenses are a reality of home ownership. An emergency fund can help you cover costs such as repairing a leaky roof or replacing a broken-down appliance. Lenders are also likely to view you as more financially responsible if you have six months' worth of expenses saved up.