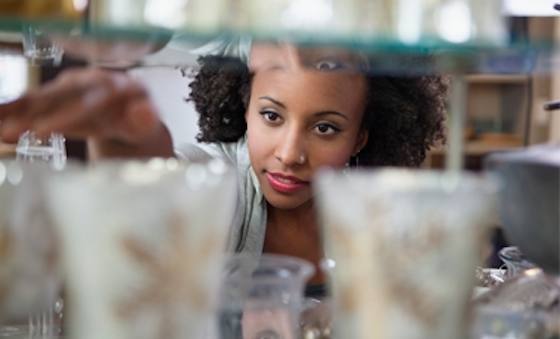 I love a good deal. That said, I was dubious when my editor handed down this assignment. My perception of dollar stores has always been that of subpar or off-label products, but then I talked to a couple of pro money-savers and they set me straight. "You can find phenomenal deals at the 99 cent store," say Steve and Annette Economides, finance experts and bestselling authors of Cut Your Grocery Bill in Half.

"But you've got to know your stuff before you start stretching your dollars."

Preparation involves several factors when it comes to dollar stores, the couple told me. They armed me with the following

Depending on where you live, you may have anywhere from one to a handful of different dollar store varieties. "You'll get different deals at different stores -- some have produce, some sell greeting cards two for one, so get familiar with the deals and differences in your area," says Steve.

Look at the size of the product compared to the price. "I saw a package of really lean lunchmeat ham that looked great on first glance, but then I saw that it was just 4 ounces for a dollar -- that's four dollars a pound -- pass!" says Steve. Some manufacturers are now making products especially for dollar stores, which means they sometimes make the packages smaller.

Annette was thrilled to find an off-brand 1,000-count package cotton swabs. "I was able to feel the tip to know that there was plenty of padding -- a great deal." You can also garner clues by reading the package labels carefully. If a product looks similar to a name brand product you might see in the store, it could be made by that same manufacturer, but just be designed for dollar stores. And you can also read labels of cleaning products to see how much they are diluted. "Dollar stores carry off-label brands and sometimes the concentration is much less than you actually need, so it really doesn't save you any money," says Steve.

Have a buy price.

Steve and Annette suggest keeping a simple price sheet on products you buy regularly, so you'll have a quick reference guide when you go shopping. "Stuffing is a family staple for us, and I know that the best deals available for stuffing are at Thanksgiving time, for around 99 cents for a 16-ounce box," says Annette, "so when I saw stuffing in May at the dollar store, I stocked up."

Armed with the above tips and suggestions from Steve and Annette, I headed off to my local dollar store to see what I could find. It didn't disappoint. Below you'll see a sampling of Annette and Steve's best deals, along with what I found.

Spend. Steve and Annette had told me that I would find great produce, but I must admit I didn't believe them -- but right they were. I came home with a pound of artisan lettuce (they had told me about this) for a buck (the same lettuce my local grocery store sells for five dollars); a bunch of bananas; tomatoes (five in a container); a bag of nectarines; a bag of five large apples for a dollar; and huge artichokes for 99 cents each. The quality and taste of all were fantastic.

Study. I bought toothpaste and shampoo, but I skipped toothbrushes, and deodorant because the former was not great quality, and the latter was almost travel-sized.

Spend. Steve and Annette say that their Dollar Tree has a dollar deal that buys you two cards for one buck.

Study. If you've got small kids, the dollar store is a great place to stock up on bubbles and sidewalk chalk, but they still have the cheap plastic swords and other toys that break quickly, so choose wisely.

Save. As Steve warned, a lot of cleaning supplies are heavily diluted, and the quality didn't seem up to snuff on paper towels. But a gallon of bleach was a good buy.

Save. The dollar store that I was at had plenty of cereal options, but the boxes were all much smaller than what you'd see at your regular store.

Spend. I found great deals on brand name healthy whole-wheat bread for 99 cents. I stocked up on some extra to freeze for school sandwiches.